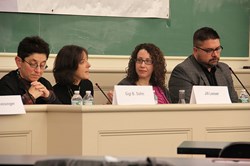 In breaking new ground with the Media Breaker, it is our intent to help create 10,000 little Jon Stewarts - engaged, excited and activated users breaking the media and changing the message.

In an event this week at New York University, The LAMP (Learning About Multimedia Project) introduced the Media Breaker, an online video editor designed exclusively for remixing copyrighted content in an educational setting. The launch event, sponsored by NYU School of Law’s Engelberg Center for Innovation Law & Policy and the Mozilla Hive NYC Learning Network, included panel discussions with students as well as media and education experts, followed by a reception. The Media Breaker and supporting educational materials can now be accessed online at mediabreaker.org.

During his remarks, D.C. Vito, The LAMP’s Executive Director said, “In breaking new ground with the Media Breaker, it is our intent to help create 10,000 little Jon Stewarts – engaged, excited and activated users breaking the media and changing the message.”

The Media Breaker allows users to import copyrighted videos such as news clips, music videos and commercials. With a suite of audio and video editing tools, users remix and insert critical statements about those media, often calling out stereotypical representations or misleading messages. Once the user submits the video, it is sent to a review board for adherence with fair use guidelines. If the video is deemed acceptable, it is posted publicly on The LAMP’s social media portals. It also becomes the property of The LAMP, which thereby assumes any legal liabilities which may come about as a result of the work.

In using the Media Breaker, students hone skills aligning with many standards in the Common Core initiative, and with what are sometimes referred to as “21st-century learning skills.” These skills include critical thinking, collaboration, creativity, information literacy, and communication. However, when The LAMP brought its programs to public schools, the organization came face-to-face with many hurdles faced by teachers, particularly those in low-income communities, wishing to teach these 21st-century skillsets. Teachers cited a lack of access to editing programs, limitations due to sharing computers in a lab, finding the editing software too complicated to learn, and a lack of awareness about fair use rights for educators and students.

“With its user-friendly interface and fair use features, and because it lives in the cloud, The Media Breaker is designed to overcome some of these teaching obstacles,” said Mr. Vito. “On top of that, it’s free. There is no one silver bullet to every problem around access to educational technology, but the Media Breaker is a huge step forward in making 21st-century learning possible in more schools across the country.”

Testing of the Media Breaker began in July 2013, with students reporting that it was “better than [Windows] Movie Maker.” The Media Breaker is slated for in-school programming with two NYC high schools as part of the Department of Education’s Digital Ready initiative. Media Breaker programming will also be coming to schools in Santa Monica, Miami, Pittsburgh, Chicago and Boston, although all schools nationwide are able to use the tool at no cost.

“As someone who is trying to figure out how educators should teach copyright and fair use, I am really intrigued by what the Media Breaker can do,” said Jill Lesser, Executive Director of the Center for Copyright Information.

“I love the Media Breaker because it allows us to critique and complain with the goal to create,” said digital artist and educator Elisa Kreisinger of Pop Culture Pirate. “Being critical of the media, taking it apart and forming an argument why it's bad is useful not just for critical thinking, but because it forces us to think about the kind of media we want to see and make ourselves.”

Through initial funding from the John S. and James L. Knight Foundation, The LAMP worked with developers at the Seidenberg Creative Labs at Pace University to create the beta version of the Media Breaker that was unveiled last night. The LAMP is currently seeking funds to support additional enhancements to the tool and ongoing bandwidth costs.

The LAMP:
Founded in 2007, The LAMP envisions a world of critical and active participants, and seeks to educate and equip people to shape the media landscape through hands-on training. By transporting equipment and educators directly to schools, library branches and community centers, The LAMP is able to reach communities which otherwise have little or no access to media and technology education. For more information: http://www.thelampnyc.org.

Why Do I Need to Understand Fair Use? A LAMPlit Resource Guide