A new Friends of Science study by research director Ken Gregory shows that the Canadian climate model CanESM2, used by the Intergovernmental Panel on Climate Change (IPCC) to predict global warming, fails to replicate temperature observations by hundreds of percent – predicting extreme heat when the reality observed is only nominal warming. 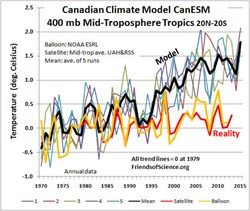 Friends of Science have released a new in-depth study of the predictive climate models of the Canadian Centre for Climate Modeling and Analysis (CCCma) located at the University of Victoria in British Columbia. The CCCma is a division of Environment Canada’s Climate Research Branch.

“Taxpayers in Canada should be appalled at how their money has ended up funding faulty science that has driven climate change terror around the world,” says Ken Gregory, director of Friends of Science.

The Intergovernmental Panel on Climate Change (IPCC) used the Canadian model to claim dangerous climate change and global warming were imminent. Friends of Science study reveals that the faulty Canadian computer models have led to climate change policies that have wasted trillions of taxpayers’ dollars on a non-existent problem.

The study titled "The Canadian Climate Model's Epic Failure" is on the Friends of Website here and was also published on the award-winning website "Watts Up With That?" here.

“The modeled prediction of global near-surface temperature warming rate is 226% of the measurements – far too high,” says Gregory. See here.

“In the tropics, the Canadian predictions are extremely far off,” says Gregory, pointing to a predicted temperature model trend over the tropics at 7 km altitude that is 690% of the actual trend based on satellite measurements, from 1979 to today. See here.

The Canadian model near-surface tropical temperature trend is 300% of the average of the three observational trends. See here.

In much of the southern hemisphere, the near-surface modeled temperature tend is in the opposite direction from the measurements, which show cooling.

“These huge errors render the projections useless,” says Gregory. “They are terrifying, but completely inaccurate. Global warming stopped 16 years ago. Models that are this far off are useless for setting public policy.”

Friends of Science Society wants governments to abandon using faulty climate computer models for setting public policy on climate change until they are changed to match the observations as is required by the Scientific Method.