Leading whiteboard animation company, Fire Starter Videos, has today announced that they have signed a 3-year lease in a newly renovated building in the heart of Hollywood California. 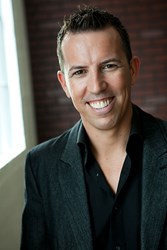 We are proud to employ Californians ranging from voice actors, artists and administrative workers to support our global client base which now includes everyone from Fortune 500 companies to Silicon Valley startups and small businesses.

Leading whiteboard animation company, Fire Starter Videos, has today announced that they have signed a 3-year lease in a newly renovated building in the heart of Hollywood California. Fire Starter’s new premises will be located on the 4th floor of 6515 West Sunset Boulevard, just one block west of the world famous Amoeba Records and the iconic Hollywood Cinema Dome and Los Angeles Film School.

The building is currently undergoing a full renovation and Fire Starter will be among the first tenants to occupy the building when it opens. The state-of-the-art office will include life size paintings of some of Fire Starter's now semi-famous characters that have starred in the various animated videos created by the company for its clients. The paintings will be done a local LA muralist.

Fire Starter Videos’ CEO Adam Hudson had this to say about the company extending its commitment to stay in the city of Hollywood.

"Over the past 18 months we have experienced significant growth and we wanted to remain in the city that has been so good to us. Hollywood is the heart of the entertainment business globally and although we create whiteboard animation videos for businesses, entertainment is at the heart of what we do. We are proud to employ Californians ranging from voice actors to cartoonists and storyboard artists to support our global client base which now includes everyone from Fortune 500 companies to Silicon Valley startups and small businesses of just about every kind."

Since the company launched, Fire Starter Videos has become well-known for creating short animated videos that quickly explain how a company's product or service works. Their growth has been in lock-step with the rise of online video in recent years, as more website owners realize that consumers would rather watch video than read text, and the data supports this.

In a recent survey by Forbes Magazine, 59% of executives stated that they would prefer to watch video than read text if both are available on the same page. While Implex.com revealed that emails with video content enclosed have click-through rates up to 96% higher than emails without video.

Fire Starter Videos specializes in creating compelling whiteboard animation videos, otherwise known as video scribing. The company has differentiated itself in a highly competitive space by delivering professional art and access to some of the top voice talent in the US.

In addition to delivering top quality hand-drawn art and professional voice actors that bring life and richness to the narrative, Fire Starter has also worked hard on it's customer experience, an area that has been notoriously challenging for companies who deliver creative products. In an industry notorious for up-charges and time blow-outs, Fire Starter Videos has earned a reputation for keeping to time and budget constraints as well has having processes in place to ensure that there are no surprises in regard to timing or budgets.

Despite their low prices and quality product, Fire Starter clients have their scripts written by award winning writers. Their voice overs are performed by voice actors that have read for companies including; Disney, Microsoft, eBay, Facebook, Levis and Amazon. As a result, Fire Starter Videos has become one of the busiest whiteboard animation studios in America, having produced more than 300 videos in the last 12 months alone. Clients include; Volvo, The World Bank, UNICEF, MasterCard, The Humane Society and many others.