Courting Mae West Productions has organized entertaining events that pay tribute to the Brooklyn bombshell, an American original who died in November 1980 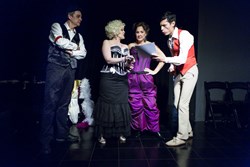 Diamond Lil shows off her photos to Gus Jordan, Rita, and Pablo Juarez

Several exciting events during the month of November (including a gala commemorative dinner) bring the Brooklyn bombshell back to her hometown admirers at different locations in Manhattan.
.
Bushwick native Mae West [1893-1980], remembered for her motion pictures, rose to fame during the 1920s with headlines such as “Actress and Author Arrested for Alleged Indecent Performance” and “Mae West Defies Cops.” She wrote plays for Broadway and checks to bail out her cast; she rode in limousines and paddy wagons; she slept in a swan bed onstage and an iron cot in the Women’s Workhouse; and she’s liberally quoted in Bartlett’s as well as in a trove of trial transcripts.
.
To go back in time with Broadway star Mae West, see “Diamond Lil,” the “melodrama of the underworld” that the legendary actress wrote in 1928 and toured with until 1951. A considerably altered version became the film “She Done Him Wrong” [1933] starring Mae as saloon singer Lady Lou and featuring a young Cary Grant as Captain Cummings.
.
To learn more about the real life of Mae West, when she was arrested, jailed, and persecuted by City Hall and the police, check out “Courting Mae West,” a play based on her legal woes from 1926—1932.
.
About “Diamond Lil” written by Mae West and adapted by LindaAnn Loschiavo:
“Diamond Lil” is set in 1895 on the Bowery in Chinatown. Diamond-loving Lil, a chanteuse starring at Gus Jordan’s dance hall, becomes fixated on Captain Cummings, who seems to be the leader of a Bowery rescue mission and a clean-living decent man. Diamond Lil falls in love with this handsome missionary, unaware that he is an undercover detective who is about to arrest her and her lover Gus Jordan, ending the criminal enterprise that has brought her to prominence and filled her jewelry box with diamonds.
.