MensArmor company is making wedding rings that look like hardware and hold up to tremendous abuse. Rings are labelled as "bullet proof, hammer proof, and divorce proof". 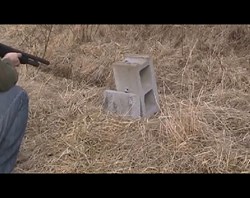 The founder of MensArmor.com shoots his own personal wedding ring with a shotgun "Just to see what comes of it."

The ring is strong because of two things. First, we use a superior alloy with a superior case hardening method, and secondly, the shape itself is strong.

The MensArmor wedding ring company is clearly not a traditional jewelry company. In new videos published at http://mensarmor.com/ the MensArmor wedding bands are subjected to various abuse tests and come out just as shiny as they went in. According to the website, the ring was designed to look like a heavy duty construction nut or bolt, and is meant to withstand nearly any kind of abuse. The front page of the website boasts that the rings are bullet proof, hammer proof, and divorce proof.

It’s hard to say which claim to investigate first, but the company's primary concern is building successful marriages and reducing the divorce rate. For every ring sold, the company donates 51% of its profits to organizations that support strong marriages, and sends an informational pamphlet for all buyers which provides information about how to have a successful marriage. Company founder Tyler Weidler says he is more interested in helping launch strong marriages than in selling rings. "Our rings are meant to symbolize strength, integrity and permanence. When a man puts on a wedding band it should be a reminder to him and to the world that he is committed to love his wife forever."

Part of the pamphlet which attends every ring purchase states "we don't regard the big jewelry makers as our competitors because our goal isn't to sell rings or make money. Our goal is to communicate the importance of strong marriages and we believe that for the most part, in our society, it is men who need to hear this message the most. So our mens wedding band signifies permanence, strength and integrity and we sell it based on those principles. If a man is going to cheat, abuse, or divorce his wife then we don't want him wearing our ring. It’s that simple. You buy a MensArmor ring because you believe in honoring and cherishing your wife forever.”

Nonetheless, the ring itself is quite distinctive. It was designed to look like a heavy duty construction nut that is used on bridges, skyscrapers and automobiles, while still being comfortable to wear. "Of course it is unique and manly looking. Most of my customers are men who have been married for years, but have only now found a ring that they actually enjoy wearing,” says Tyler.

In the videos released on mensarmor.com, the ring is put on top of a jack underneath a car and used to jack the car off the ground, without bending or breaking the ring. In another video the ring is shot twice with a shotgun, again without a noticeable effect. In other videos the ring is run over by a truck, attached to chains to tow a car, and hit with a sledge hammer.

The ring is strong because of two things. First it uses a superior alloy with a superior case hardening method, and secondly, the shape itself is strong. The combination of a strong material formed in a strong shape makes the rings virtually indestructible.

Asked to comment on future abuse tests of the ring, Tyler stated that there are several more projects in the works, hinting that the ring is able to stop a high speed tungsten carbide drill bit and withstand a tumbler full of rock salt and acid bath for a month.