"Maus" author to discuss “What the %@&*! Happened to Comics?” on November 18. Prior to the Spiegelman talk, guests can view allied exhibit of comic art and cartooning. 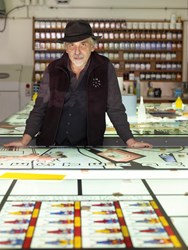 A lecture by Pulitzer Prize-winning artist/illustrator Art Spiegelman on Nov. 18 and a gallery exhibit of comic art will highlight Lakeland College’s celebration of comics and sequential art.

Spiegelman, the author of “Maus” and “In the Shadow of No Towers” and an influential artist for The New Yorker, will give a talk entitled, “What the %@&*! Happened to Comics?” beginning at 7:30 p.m. in the Bradley Theatre on Lakeland’s main campus in rural Sheboygan County.

Tickets for the lecture are $10 and can be purchased by calling (920) 565-1536. His appearance is part of Lakeland’s Krueger Fine Arts Series.

Spiegelman helped put comic books on literature shelves. In 1992, he won the Pulitzer Prize for his masterful Holocaust narrative “Maus,” which portrayed Nazi cats exterminating Jewish mice. “Maus II” continued the remarkable story of his parents’ survival of the Nazi regime and their lives later in America.

Prior to the Spiegelman talk, guests can view an allied exhibit of comic art and cartooning. “Re-Constructing Comics: Explorations in Sequential Art” showcases the work of seven nationally recognized artists from the world of comics. With contributions from Derik Badman, Ivan Brunetti, Vanessa Davis, Aidan Koch, Andrei Molotiu, Anders Nilsen and John Porcellino, the show will explore how these seven artists push, dissolve and rearrange the borders of the comics form.

More information about the artists is available at http://lakeland.edu/comics.

The Nov. 18 events are the culmination of a focus on comics that has been part of several Lakeland classes this semester. All Lakeland’s freshmen have been reading Spiegelman’s “Maus” in their first-year Core I class, and Professor of American Literature Peter Sattler has been teaching a class this fall on “The Art of Comics.”

Some students enrolled in these classes will have an opportunity to meet with Spiegelman privately for an additional discussion about his work.

Every Lakeland freshman takes Core I, a yearlong course that aims to enhance students’ critical thinking skills and broaden their understanding of “the self.” Nate Lowe, associate professor of writing and coordinator of Core I, said using “Maus,” Spiegelman’s memoir about his father’s harrowing Holocaust narrative and his own struggles with his aging father, provides students a complex view of “the self.”

“Spiegelman tells the story in a comic, which adds yet another fascinating layer of art and innovative story telling that students and faculty can explore in the classroom,” Lowe said. “Having Spiegelman on campus is a tremendous opportunity for our students to engage in how art, narrative and critical self-reflection enhances what we can learn from others and from ourselves.”

Spiegelman’s comics are best known for their shifting graphic styles, their formal complexity and controversial content. In his lecture, Spiegelman takes his audience on a chronological tour of the evolution of comics, while explaining the value of this medium and why it should not be ignored. He believes that in our post-literate culture the importance of the comic is on the rise, for “comics echo the way the brain works. People think in iconographic images, not in holograms, and people think in bursts of language, not in paragraphs.”

Spiegelman studied cartooning in high school and began drawing professionally at age 16. He went on to study art and philosophy at Harpur College in upstate New York (now Binghamton University) before becoming part of the underground comix subculture of the 60s and 70s. As creative consultant for Topps Bubble Gum Co. from 1965-1987, Spiegelman created Wacky Packages, Garbage Pail Kids and other novelty items, and taught history and aesthetics of comics at the School for Visual Arts in New York from 1979-1986.

In 2007, he was a Heyman Fellow of the Humanities at Columbia University where he taught a Masters of the Comics seminar. In 1980, Spiegelman founded RAW, the acclaimed avant-garde comics magazine, with his wife, Françoise Mouly. “Maus” was originally serialized in the pages of RAW.

Currently, he and his wife publish a series of early readers called Toon Books—picture books in comics format—and have co-edited “A Toon Treasury of Classic Children’s Comics” (Fall 2009). His work has been published in many periodicals, including The New Yorker, where he was a staff artist and writer from 1993-2003.

In 2004, he completed a two-year cycle of broadsheet-sized color comics pages, “In the Shadow of No Towers,” first published in a number of European newspapers and magazines including Die Zeit and The London Review of Books. A book version of these highly political works was published by Pantheon in the United States, appeared on many national bestseller lists and was selected by The New York Times Book Review as one of the 100 Notable Books of 2004.

In 2009, “Maus” was chosen by the Young Adult Library Association as one of its recommended titles for all students (the list is revised every five years and used by educators and librarians across the country).

In fall 2011, Pantheon published “Meta Maus,” the story of why he wrote Maus, why he chose mice, cats, frogs and pigs, and how he got his father to open up (the new book includes a DVD of the transcripts of Spiegelman’s interviews with his father). “MetaMaus” has been awarded the 2011 National Jewish Book Award in the Biography, Autobiography and Memoir category.

In 2005, a major exhibition of his work was arranged by the Museum of Contemporary Art, Los Angeles, as part of the “Masters of American Comics” exhibit, which later traveled to the Milwaukee Art Museum. The same year, Spiegelman was named one of Time Magazine’s 100 Most Influential People.