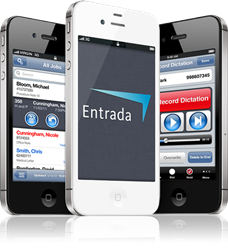 Entrada recently released its 2013 Entrada [Mobile] User Survey, revealing the success of its mobile dictation solution with its clients. The survey, which features results from a cross-section of Entrada’s customer base, polled practices of varying size and specialty to gauge how the mobile application has impacted productivity and workflow for physicians, staff, and administration.

Entrada’s core mobile application syncs with a provider’s existing practice management system to build the physician’s active worklist, pre-populated with patient demographic information, directly on the provider’s preferred mobile device. Physicians then securely use this list to capture high-quality voice dictation files. With a tap of a finger, these voice files are processed, edited and then returned directly back inside individual text fields within EHR templates, ultimately enhancing the speed and efficiency of the documentation.

Entrada protects physician productivity before, during and after the transition to an EHR system. Since every provider’s workflow is different, Entrada’s cloud-based voice engine enables physicians to dictate on their terms, whether through a digital dictation and backend editing workflow or through real-time, front-end speech-to-text for those who wish to self-edit. Whether dictating from a worklist on a mobile device or from directly within the EHR with a speechmike, Entrada provides a fast, easy way to document clinical information and makes EHRs much easier to adopt and use. For more information, visit http://www.EntradaHealth.com. Follow Entrada on Twitter @EntradaHealth or Facebook at /EntradaHealth.