Celtic Woman Returns to DPAC for "The Emerald Tour" 2014 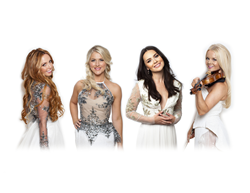 Global music phenomenon Celtic Woman will return to North American concert stages in early 2014 with The Emerald Tour, which will encompass over 75 performances in more than 65 cities and stopping at DPAC Saturday, March 8, 2014. The tour launches at Nashville's Tennessee Performing Arts Center on February 14 and continues through mid-June. For complete tour schedule and ticket information, visit http://www.CelticWoman.com.

The elaborate new stage presentation will celebrate the Emerald Isles’ spellbinding musical and cultural heritage. The concerts will combine longtime fan favorites with new musical gems written specifically for Celtic Woman, under the direction of Emmy®-nominated music producer David Downes. The Emerald Tour will spotlight the angelic voices and inspiring music that have won Celtic Woman the devotion of a worldwide audience.

Since its inception in 2004, Celtic Woman has emerged as both a spectacular commercial success and a genuine cultural phenomenon. The group's uplifting mix of timeless tradition and contemporary craft has transcended national and cultural borders to touch the hearts of a loyal international fan base, who've embraced Celtic Woman's hugely successful public television specials and made their eight CDs and seven DVDs into multi-platinum best-sellers. The multitalented ensemble has sold more than eight million copies of its releases, all of which have debuted at #1 on Billboard's World Music chart. As a live act, they continue to sell out concert halls around the world, having performed for nearly three million fans.

Celtic Woman has won a particularly passionate audience in America, where their elaborately staged, visually stunning concert tours consistently draw sellout crowds. The group has performed twice at the White House, as well as making high-profile appearances on such American television shows as Dancing with the Stars and the daytime drama The Bold and the Beautiful.

Celtic Woman recently completed a successful month-long tour of European concerts, encompassing performances in Germany, Austria, the Netherlands, Belgium and Switzerland. The busy group is currently preparing for its third annual holiday tour of North America, accompanied by a full symphony orchestra. The group then plans to kick off 2014 with a rare tour of Australia.

Singing songs of love, loss, hope and inspiration, Celtic Woman celebrates Ireland's centuries-old musical and cultural traditions, while taking advantage of the limitless options of state-of-the-art stage production. The result is a breathtaking musical and theatrical experience to be enjoyed by multiple generations of concertgoers.

More dates to be announced.