Buckinghamshire New University has renewed its community partnership with London Wasps which will see it continue to be the ‘Official University Partner’ of the club. 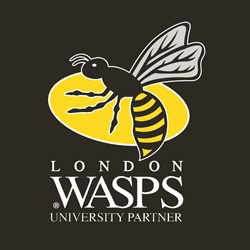 Bucks New University has been a long and trusted partner of London Wasps and we’re delighted to be working with the University again this season.

Buckinghamshire New University has renewed its community partnership with London Wasps which will see it continue to be the ‘Official University Partner’ of the club.

The University, which has been an official partner of the club since 2007, will continue to benefit from London Wasps providing coaches to work with the University’s rugby squad and deliver rugby coaching and coach education to sports students.

The agreement will also see members of the London Wasps commercial and community teams deliver guest lectures at the University, as well as the Club providing work experience and internship opportunities for Bucks students in what is a special partnership between a university and an Aviva Premiership rugby club.

Paul Morgan, Head of the Department of Sport Management at Bucks New University, said of the partnership: “We’re delighted to extend our successful relationship with a top flight sports organisation such as London Wasps. The agreement has given our students direct access to key people at Wasps, and also valuable internships, work experience and job opportunities.

“Several of our former students are now employed directly with London Wasps as well as with numerous other Aviva Premiership rugby clubs and the Rugby Football Union, and also in Europe, Asia and America, both within the community and elite game. A lot of these employment pathways can be traced back to our successful partnership with London Wasps.”

Commenting on the partnership, London Wasps Community Manager, Dave Larham said: “Bucks New University has been a long and trusted partner of London Wasps and we’re delighted to be working with the University again this season.

“There are a number of exciting innovations within our agreement this year such as special open days involving coach education demonstrations and discussions with our commercial team and we are fully committed to helping them to produce excellent calibre, well-rounded students. This extension to our agreement proves we are already assisting in delivering this and look forward to continuing to do so.”

The partnership will run for the course of the 2013-14 academic year and the Aviva Premiership season and will also include some exciting new digital cross-promotional content and campaigns for both London Wasps fans and Bucks New University students, including increased opportunities for social media engagement. London Wasps will also be a key player in the Graduate Jobs in Sport event to be held at the University in March 2014.

Buckinghamshire New University has enjoyed a long and successful history since it was founded in 1893. The University offers an extensive portfolio of courses spanning the creative and cultural industries, the management and information management sectors, and the public sector. It also offers services to industry including contract research, consultancy and the opportunity to employ graduates.

The University has a state-of-the-art building in High Wycombe known as the Gateway, which comprises a learning resource and technology centre, events hall, gym, sports science laboratory, dance, drama, music and video production studios, library and meeting rooms. It also offers a growing provision of student accommodation in High Wycombe; and a thriving base for nursing students and applied healthcare research in Uxbridge, West London.

Bucks New University’s Vice Chancellor, Professor Ruth Farwell, is Chair of GuildHE, which represents the heads of some of the most recently designated universities and university colleges, specialist colleges and other bodies providing higher education programmes.