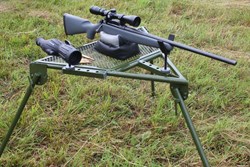 "An armed society is a polite society." - Robert A. Heinlein

A shooting bench that can accommodate pistol grips, high-capacity magazines, and is portable represents a major advancement in varmint, bench rest, target, casual, and tactical shooting benches. Even if you are not a Delta Team sniper or a SWAT Team designated shooter, there is nothing more discouraging than zeroing the crosshairs on a target or varmint only to find that the shooting bench is not 100-percent stable, and in the process destroy a perfect sight picture and shooting solution. The Ten Ring® incorporates numerous advanced structural and functional features. One of the more significant ones is an integral ambidextrous spotting scope mounting system. The mount has five anchor sockets along each side of the rest to allow for optimum eye relief and compensates for spotting scopes of varying lengths. The mounting system attaches to the 1/4" x #20 screw boss, which is a standard feature on all modern spotting scopes, to allow for traversing and elevation.

In the world of guns, lengths vary from the Mossburg model #500 with a 20” barrel and pistol grip up to the Savage FTR, F Class long range competition rifle with a 30” barrel. The Ten Ring® can easily accommodate both of these guns and all variations in between. The foam padded forward V notch gun support can be solidly locked into elevation and can be set into any one of five sockets to accommodate guns of varying lengths. By virtue of the fact that the distance from the padded V-notch front gun support to the shooter is adjustable, the bench is also a perfect shooting platform for Colt, Glock or Smith & Wesson semi-automatic pistols and Taurus revolvers. The deck has been designed large enough to support most shooting rests available in today's market. Rifle rests such as the HYSKORE® #30207 Rapid Fire® Precision Shooting Rest or the HYSKORE® #30034 Rotating Handgun Rest are a perfect fit. Whether you’re into reloading ammunition, white tail deer hunting, target shooting, plinking, or hand gun shooting, the Ten Ring® Portable Shooting Bench will make you the envy of your shooting range, gun club, or varmint hunting buddies. In short, the Ten Ring® is a shooting bench with advanced features that will compliment tactical rifles and shot guns, precision target rifles, long range rifles, and handguns from a Ruger MK II to a Colt .45 cal. Model 1911.

The fact that the Ten Ring® has sufficient clearance for military style black guns with high-capacity magazines and pistol grips also gives it enough relief from the bench surface for lever and pump action rifles and shot guns; bolt action rifles are, of course, fully supported. Equally as important, the Ten Ring® addresses the shortage of shooting benches in the market that give the shooter the ability to cycle a pump action shotgun or a lever action rifle without removing the gun from the bench. The actions of both types of guns can easily be operated without disturbing the point of aim. Most shooting benches are not designed with the comfort of the shooter in mind. Typically, in order to get into a good shooting position there is some part of the bench that protrudes and irritates the shooter; and this is especially problematic for left-handed shooters. The Ten Ring® solves this problem by giving full support to both right and left handed shooters. This way all shooters can develop a perfect set up so that the gun is properly supported by the forward gun support and the shooter is comfortably supported by the shooting bench. The Ten Ring® is the perfect bench for long range competition shooting such as, bench rest or F class events using custom rifles or extreme range varmint hunting using a Remington model 700 in .25-06 or a Winchester model 70 in .308. This feature also makes it a great choice for firearms training for both beginning and advanced shooters. The set includes an ambidextrous spotting scope mount, a magnetic bubble level, and a padded V-notch while the legs feature welded steel feet that aggressively grip soil or turf. The legs can be set to one of two positions to provide 2 different bench to ground clearances and can be folded and locked into position to make a compact, easy to transport, unit that weighs in at just 19 lbs. It is strongly recommended that ANSI approved eye and hearing protection with adequate OSHA and NRR ratings are used at all times when in the vicinity of firearms being discharged.

A full range of compression dampened, recoil attenuating shooting and tactical / varmint rests is available from HYSKORE®, http://www.hyskore.com. The line up consists of the DLX Precision Sighting Rest, the Dangerous Game® Machine Rest, the Bench Beast Competition Shooting System, the Dead Eye® Tactical & Varmint Rest, the Black Gun® Shooting Rest, the Rapid Fire® Precision Shooting Rest, and the Black Gun® Machine Rest. These are fully supported on the HYSKORE® website with instruction manuals, target downloads, and both demo and tutorial videos. Most importantly, these advanced shooting rests are affordable to the average shooter.

The rest folds into a neat, tight bundle for ease of transport and storage

There are multiple attachment points for the spoting scope

The feet provide an aggressive grip on turf or dirt