In The Wake of Recent C8 Lawsuits Wright & Schulte LLC Has Found The C8 Science Panel's Linking To Testicular Cancer and Mid-Ohio Valley Residents Who Lived or Worked in Vicinity of DuPont’s Washington Works Plant in Parkersburg, West Virginia, Concerning. 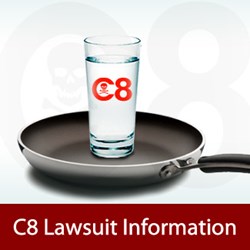 If you believe you or a loved one have been exposed to C8 contaminated drinking water, contact Wright & Schulte LLC for a FREE C8 lawsuit case evaluation at www.yourlegalhelp.com or 1-800-399-0795.

The C8 Panel was created under DuPont’s 2005 C8 class action lawsuit settlement, which affected more than 70,000 people who lived and worked near the DuPont facility. ((Leach v. E.I. Du Pont De Nemours & Co., No. 01-C-608 (W. Va. Cir. Ct.) According to court documents, the Panel was charged with investigating potential links between exposure to the chemical and a number of serious illnesses. The settlement also held that individuals who were exposed to C8 contaminated water associated with the Washington Works plant would be entitled to file an individual C8 lawsuit against DuPont if they developed any ailment deemed a probable linked disease by the C8 Panel. To do so, potential claimants must have lived or worked in one of six water districts included in the agreement prior to December 1, 2004:

In reaching its determination on testicular cancer, the C8 Science Panel looked at a number of studies, including one that involved 32,000 people who were interviewed between 2009 and 2011. Using records of past emissions from the DuPont plant and the residential history of study subjects, the Panel estimated the level of C8 in the blood of the subjects over time before cancer occurred. They found that as C8 levels increased, the rate of testicular cancer was 80 to 70 percent higher. A second C8 Science Panel study that looked at geographical areas with the highest C8 exposure corresponded to the highest rates of testicular cancer
[c8sciencepanel.org/pdfs/Probable_Link_C8_Cancer_16April2012_v2.pdf, C8 Science Panel, April 2012]

In addition to testicular cancer, the Panel concluded in October 2012 that there were probable links between exposure to C8 contaminated drinking water and several other serious ailments, including:

According to court documents, individuals covered by the terms of the C8 class action lawsuit settlement who have developed illnesses that may be associated with pollution from the Washington Works facility have begun to file personal injury lawsuits against DuPont. In April 2013, a multidistrict litigation was established in U.S. District Court, Southern District of Ohio to consolidate those claims for pretrial proceedings. Richard W. Schulte, a partner with Wright & Schulte LLC, is a member of the Plaintiffs’ Steering Committee in the proceeding. Trials in the litigation are expected to begin in the fall of 2015. (In Re: E.I. DuPont De Nemours and Company C-8 Personal Injury Litigation, MDL No. 2433)

About Wright & Schulte LLC
Wright & Schulte LLC, an experienced personal injury firm, is dedicated to the belief that America’s legal system should work for the people. Every day, the attorneys of Wright Schulte LLC stand up for the rights of people who have been injured or wronged, and fight tirelessly to ensure that even the world’s most powerful corporations take responsibility for their actions. If you’re looking for a law firm that will guarantee the aggressive and personal representation you deserve, please do not hesitate to contact Wright & Schulte LLC today. Free DuPont C8 lawsuit case evaluations are available through yourlegalhelp.com, or call 1-888-399-0795.