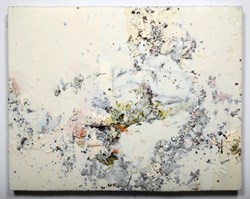 Michael David may be the most innovative master of immediate surface since the Abstract Expressionists; his epic works are among the best painterly abstractions made.

Michael David is widely regarded as the one of the top encaustic artists of the 21st century. He has built his career on abstraction and an intuitive need to explore the continuity of wax as a medium, which has presently developed into dense and lush pictorial landscapes. His work is included in the permanent public collections of the Museum of Modern Art in New York, the Guggenheim Museum in New York,and the Museum of Contemporary Art in Los Angeles, as well as in many prominent private collections.

Top art critic Donald Kuspit has described David’s work in this manner: “Michael David may be the most innovative master of immediate surface since the Abstract Expressionists. He has acknowledged his debt to Abstract Expressionism, but he has transformed it. Where the Abstract Expressionist paintings of the forties and fifties seem like modern cave paintings, as their crude, unfocused, often meandering, turbulent painterliness suggests, David seeks to reinstate prehistory, turning the cave into a temple. His more concentrated, dense and contemplative paintings have the aura of post history. David’s abstract paintings renew immediacy; they reconstitute and strengthen, even apotheosize it. They raise it to a feverishly fresh intensity with their remarkable touch, indicating they are among the very best painterly abstractions made.

Bill Lowe Gallery has been recognized as the South’s pre-eminent contemporary gallery for a quarter-century. The gallery is internationally acclaimed for the depth and scope of its program, curatorial excellence, and concentration on content-driven work by artists with an advanced technical mastery of their media.