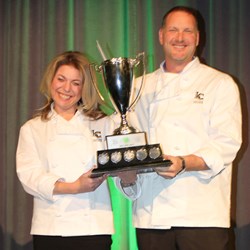 It's the shining talent of our students that speak so well to their dedication and the fact that they are 'Living the Dream'.

Taste Canada Cooks the Books is a unique two-day event leading up to Taste Canada - The Food Writing Awards. The competition invites culinary students from across the country to make a dish from a shortlisted Canadian cookbook with the author on stage.

The cook book authors train and counsel the student chefs in a mentoring program and the timed cooking and plating of the dish is played out in front of a live audience. The 2-day event took place at the Royal Agricultural Winter Fair in Toronto on Nov 2nd and 3rd, 2013.

Taste Canada Cooks the Books, Canada’s Best New Student Chef, is part of Taste Canada’s goal to foster the next generation of culinary professionals through networking, exposure and the sharing of skills.

Rose Murray personally coached and mentored the students in the week leading up to the competition working with the recipe of Gnocchi con Sugo de Pomodoro (Potato Dumplings with Tomato Sauce) contributed to the Canada’s Favourite Recipes book by Daiene Vernile, anchor and producer of CTV’s award-winning show ProvinceWide.

The chef student’s benefited by Rose Murray’s culinary expertise acquired over 3 decades and being the author of 11 cookbooks. Ms. Murray encouraged the winning chefs to add their own touches to the recipe as allowed by the competitions rules.

"It's the shining talent of our students that speak so well to their dedication and the fact that they are 'Living the Dream'," notes Chef Duncan.

The 16 culinary industry judges who generously donated their time to the chef completion, evaluated all the student chefs vying for being Canada’s Best New Student Chef on cooking skills, recipe execution, professionalism, teamwork, and the sensory elements of appearance, taste, texture, smell, flavour and creativity of a signature garnish.

A recipe from each shortlisted book was selected and randomly assigned to each team. The recipes were carefully evaluated and chosen based on specific criteria; level of difficulty, seasonality, method of preparation, appeal etc. The students were given the recipes 2 weeks in advance of the competition to prepare and practice.

The teams were also encouraged to research the ingredients and techniques used since there were trivia questions asked for bonus points.

Each team was allowed some creative license with the recipe. They needed to keep the flavours and ingredients intact and are given the choice to adjust the method, as long as it’s approved by the author. This allows the students to show off their creativity and adjust the recipe to fit the cooking environment and the stage.

While accepting the award at the Gala, the student team noted that it was an honour to represent the work of Rose Murray and Elizabeth Baird who are both Canadian cooking icons. Elizabeth Baird was inducted into the Canadian Cooking Hall of Fame the same evening.

Prizes to the Best New Student Chef competition winners included a letter of recommendation from Taste Canada, meeting and working with industry professionals on recipe development and professional culinary equipment. A large trophy with all past winner’s names is to be kept the Liaison College Oakville campus for the coming year.

Liaison College is a private career college focused solely and exclusively on career training in the culinary arts. The focus is on training the world’s future great chefs. The chef training programs are meticulously designed by professionals in the hospitality industry, to provide students with the skills they need in today’s demanding restaurant and food services operations.

Samantha Lazuric and David McCulloch Fight the Clock to Win Best New Student Chefs in CanadaThe competition allows 30 minutes to plate the first dish and 3 minutes to plate 3 more. The team finished with no time to spare as the seconds counted down to zero.