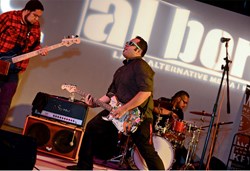 This is the sixth event in which we participated; this is absolutely our core audience. We are thrilled to see the vast attendance. The Día de los Muertos event grows more each year,

Al Borde broke its own record with this year's Day of the Dead event as nearly 2,000 guests gathered to celebrate one of the most popular cultural events of the year within the Hispanic community, the traditional Día de los Muertos concert.

Matamoska, a ska band from Montebello, was in charge of the opening act followed by the Latin rock & soul fusion band Velorio, who had no trouble winning over the crowd. After a ten year absence and choosing Al Borde's event as their comeback platform, Voz de Mano was the last band to perform. Tommy, the lead singer of the band, mentioned he was thrilled to participate at such meaningful event.

“Tonight's event was a huge success for me. It was exceptionally well planned and there was a ton of support from the crowd. Al Borde has always been a huge supporter and it is one of the few media platforms rooting for local talent. I've been a fan of music since forever, I had a great time at this event, the energy was really positive,” explained the musician.

As for Jack Daniel's, the concert's proud sponsor, they pleased the attendees at their very own Garden Bar, where a variety of free drinks, cocktails and beers were served. This was definitely the life of the party.

“This is the sixth event in which we participated; this is absolutely our core audience. We are thrilled to see the vast attendance. The Día de los Muertos event grows more each year,” said Susana Thomas, Jack Daniel's Hispanic Market Brand Manager in Southern California West Division.

Looking to offer the community a family event, Al Borde designated a special spot for the little ones with plenty of cultural activities that payed tribute to the highly celebrated Dia de los Muertos holiday, such as crafts, theater, dance, mariachi and face painting, the last one being the most popular.

“This is the first time I attend and it is quite different from other events because of the people and music. I just loved the fact that it is a family event. I will most likely be here next year,” said Menny García, who attended the event with his family.

But the attendees were not the only ones who were thrilled at the Al Borde event. Exhibitors like Andrés Liu, co-founder of Akifaru, a new clothing brand that works with the collaboration of several artists, was also excited: “As a new entrepreneur, this Día de los Muertos event has been extremely important. We introduced our products to a new audience and we sold more than we expected,” said Liu.

CONTACT:
For media interviews or b-roll of the event please contact Gabriela Alvarado, Public Relations Assistant, at 1-800-450-5852 or via e-mail at mediarelations(at)elclasificado(dot)com.