PBS Report Asks If Hospitals, Regulators and Patients Are Getting Enough Information, Including Data on Da Vinci Robot Complications, To Adequately Assess The Risks, Benefits of Robotic Surgery. 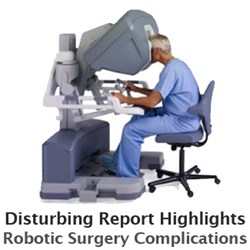 If you or a loved one have experienced Robotic Surgery complications contact Wright & Schulte LLC, today to discuss your legal options at 1-800-395-0795 or visit www.yourlegalhelp.com

If you or a loved one have experienced Robotic Surgery complications contact Wright & Schulte LLC, today to discuss your legal options at 1-800-395-0795 or visit www.yourlegalhelp.com

The Da Vinci robotic surgery lawsuit lawyers at Wright & Schulte LLC took great interest in a recent report from PBS NewsHour that asked troubling questions about the costs and benefits of robotic surgery. Among other things, the report, which aired on November 1, 2013, pointed out that one recently published study found that Da Vinci robotic surgery complications may be underreported to the U.S. Food & Drug Administration (FDA). According to Wright & Schulte LLC, the report raised serious questions regarding the risks and benefits associated with the Da Vinci Surgical System, and whether hospitals, regulators and patients are getting enough information to make informed decisions about robotic surgery.

"We rely on a haphazard reporting system that uses immature data and only the best experiences make it into the data," Said Dr. Martin A. Makary, an associate professor of John Hopkins University and co-author of the study that found Da Vinci complications may be underreported, told PBS NewsHour.

According to the report, use of the Da Vinci Surgical System has grown rapidly since it was first introduced by Intuitive Surgical, Inc. in 2000. At least 1,400 of the systems are now installed in hospitals across the U.S., an increase of 75% between 2007 and 2011. For information on Da Vinci robotic surgery complications like our Da Vinci lawsuit page on Facebook.

In October, Intuitive Surgical disclosed that it was facing at least 50 Da Vinci robotic surgery lawsuits filed on behalf of individuals who allegedly sustained serious injuries in robotic surgery procedures that utilized the Da Vinci Surgical System. That same month, Bloomberg.com revealed that in the first eight months of this year, there had been a sharp rise in Da Vinci robot complication reports to the FDA. For its part, Intuitive Surgical said that the growing litigation surrounding the robot was responsible for the increase, as any Da Vinci surgery complications alleged in personal injury claims were required to be reported. In January, the FDA began to survey doctors who use the Da Vinci to determine if the increase in adverse event reports reflected a problem with the technology itself.
[bloomberg.com/news/2013-10-17/intuitive-s-profit-declines-on-lower-da-vinci-robot-sales.html, Bloomberg News, October 17, 2013]
[sec.gov/Archives/edgar/data/1035267/000119312513297410/d551118d10q.htm; SEC, July 22, 2013]

In March, the American Congress of Obstetrics & Gynecologists (ACOG) cited a lack of evidence indicating improved patient outcomes when it advised its members that robotic-assisted hysterectomy should not be the first choice for most women in need of the procedure.
[acog.org/About_ACOG/News_Room/News_Releases/2013/Statement_on_Robotic_Surgery, ACOG, March 14, 2013]