Chatwing Company is now planning to create t-shirts for all of its loyal users and clients. 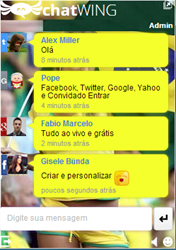 Chat Software for All Websites and Apps

New York, NY – Chatwing is going beyond the reaches of the cyberspace by announcing its plan to create a line of custom shirts. This plan has long been discussed by Chatwing website chat software developers, and it is continuously being refined for months. To jumpstart the plan, the team is now gathering t-shirt concepts from various users. Here are some of the gathered concepts:

Chatwing chat app company is planning to launch up to 100 T-shirts by January 2014. This plan is still tentative, but the company is now doing all efforts necessary. Interested users can view further updates in the company’s social networking accounts, active chatrooms, and blog series.