"Quest of the Keys" was recently released as an audio book on Audible.com. The inspirational young adult fantasy fiction book is narrated by B.J. Harrison. 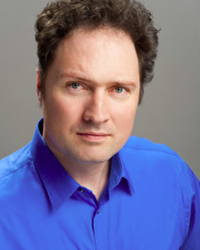 "Quest of the Keys" is incredibly polished. It is a great pleasure and privilege to be a part of this work.

B.J. Harrison, a multi-awarded narrator, has recently completed the audiobook version of Scotty Sanders’ fantasy fiction story “Quest of the Keys.” Harrison, known for “The Classic Tales Podcast” with eight million downloads, can speak 20 international languages. “’Quest of the Keys’ is incredibly polished,” says Harrison. “It is a great pleasure and privilege to be a part of this work."

The story revolves around Decklen, a young man who narrowly escapes a life of slavery--and certain death--in the caves of the Minca Silver Mines where chained slaves labored to their death. Decklen seeks help from the only man strong enough to provide it—the elder of Leonesse. Instead of strategy or weapons, the Elder gave him a locked golden cylinder containing an ancient scroll. Decklen must first find the key to unlock the scroll. He and his friend Camberly must search for the eight hidden keys that will unlock secrets that will save the entire kingdom. The audio book allows listeners to hear the characters come alive as Decklen and Camberly go back to the mines to search for Camberly’s brother who was left behind. As they work to free Camberly’s brother and find the eight keys, Decklen and Camberly find themselves on an unexpected path of danger and discovery.

“Quest of the Keys” is a reader's journey towards personal growth, responsibility, integrity, honor, leadership development, and clear purpose. The book was used in the Ouachita Parish middle schools as part of the pilot English language arts curriculum. The book has teacher resources available to give instructors in-depth background material relating to vocabulary, comprehension, written expressions, and response. The curriculum is currently being used in a growing number of school systems across the country, including in home schools. The curriculum is praised for helping students deal with real issues, such as bullying and critical thinking.

To learn more about the "Quest of the Keys" story, visit questofthekeys.com.

About Scotty Sanders
Scotty Sanders has been leading organizations for thirty years, first as a CEO for a multimillion-dollar company and then as an executive for a non-profit organization. Scotty has been recognized as the Louisiana Entrepreneur of the Year, Chamber of Commerce Business Person of the Year, and has been noted in trade magazines for his success in the business world. Scotty is a sought after speaker who has traveled both nationally and internationally to deliver speeches that are passionate, relevant, and challenging. He is also an author of books, training materials, and published articles. He and his wife, Cindy, live near Dallas, Texas.

About B.J. Harrison
B.J. Harrison has recorded over 200 audiobooks in his career. His work has received over 700 five-star ratings and reviews at the iTunes Music Store and Audible.com. His weekly audio podcast, The Classic Tales Podcast, has had over 9 million downloads.

Since B.J. began his career over 6 years ago, he has brought the immortal words of Poe, Doyle and Dickens to life in a way modern listeners have found appealing. Now, 9 million downloads and 330 episodes later, he is hired by publishers and authors to bring their characters to life. Educators are also using his free recordings in English classes around the world.

The Launch of Quest of the Keys on Audible press release