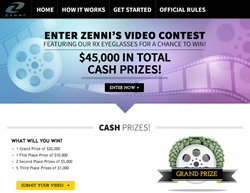 "We’re trying to spread the word about affordable eyeglasses online. The video contest helps promote this alternative. It also gives our customers a chance do a little good and have a little fun along the way"

Zenni Optical, the world’s leading online optical retailer providing the most inexpensive, high-quality eyeglasses available anywhere, has just announced the Zenni Video Contest, in which customers are invited to submit videos with only one content requirement: the video must feature one or more pairs of eyeglasses purchased from Zenni. Otherwise, they can be as adventurously creative as they’d like.

A grand prize of $20,000 will be awarded to the winning video, with additional awards given to one first place winner ($10,000), two second place winners ($5,000 each), and five third place winners ($1,000 each). Entrants must be at least 18 years old. The deadline to submit a video is December 15, 2013, and the winners will be contacted by telephone soon after the judging period ends on December 28, 2013. One or more of the winning videos may be aired on television. Go to http://www.zenniopticalvideocontest.com for more information about the Zenni Video Contest.

Zenni Optical launched in 2003 in the San Francisco Bay Area - a natural fit in the home of forward-thinking, tech-savvy companies. The mission was clear: give people glasses they can actually afford but still make them look like a million bucks. It started small, a little company with big ideas, but it quickly grew into a phenomenon. Fashionistas, moms on-the-go, discerning customers; everyone found that they could get the selection they deserved at prices they could afford with Zenni Optical.