Hotdrop is well known in the hot yoga world but has plans to extend the line to include other pieces that will be perfect for the gym, running and all types of fitness activities. The Ella is the first of many pieces to be introduced. 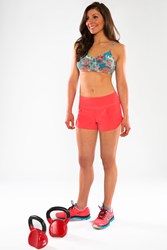 Hotdrop Apparel, known for their hot yoga clothes, launches the first of many pieces that will extend the line beyond the hot room. From its inception, Hotdrop Apparel has been a very credible brand in the hot yoga world since the owner and designer, Meredith Evangelisti is a Bikram Yoga Teacher. Meredith designs styles that function properly under the hottest of temperatures.

The product durability will remain true for the gym ready expansion of the line. Over the past year Meredith took on the new challenge of competing as a fitness model . Each new piece designed must withstand the tough workouts Meredith does on a daily basis. The newest running short, named after Eleonora Dobrinina, one of Canada's top fitness models and one of Meredith's inspirations, the Ella short is functional yet flirty and fashionable.

In 2014, Hotdrop plans to expand the line beyond hot yoga even further with its introduction of gym ready pieces and also some outerwear. This is all made possible due to the decision to bring production back to the United States from overseas. The strategic move to domestic manufacturing and sourcing will give Hotdrop the ability to launch more products at a faster pace.

Hotdrop is a Boston based business that launched in November 2011. Every article of clothing from the Hotdrop line demonstrates appreciation and admiration to those within the industry as each item is named after someone in the yoga and fitness community that has inspired the Hotdrop team. Additionally, Meredith strongly believes in giving back to the Yoga and fitness community. They are dedicated to having ongoing sponsorships with national athletes, fitness models and yoga champions.