Chicken Soup for the Soul® Apps from Oceanhouse Media

The first app in the series “Angels Around Us” is available now on the App Store. 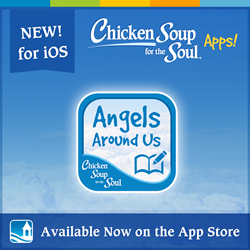 This apps gives our readers and other fans the ability to dig deeper into our stories with thought-provoking questions and a personal journal.

Oceanhouse Media, Inc. announced a new line of apps based on Chicken Soup for the Soul’s best-selling series of more than 250 books. The first app in the series, "Angels Around Us," is available now on the App Store for iOS devices at the introductory price of $2.99.

“Angels Around Us” features stories about angels, miracles and other divine occurrences. The app gives a portable reminder of the many different forms angels can take with inspiring stories about faith, miracles and answered prayers. At the core of the app are 21 stories compiled from an array of bestselling Chicken Soup for the Soul books on these topics.

“We are longtime fans of Chicken Soup for the Soul and are honored to bring these powerful, positive stories to a new generation,” said Michel Kripalani, president and CEO of Oceanhouse Media. “We’ve added compelling features to the traditional reading experience that strengthen each story’s message and foster an even deeper level of personal satisfaction. Inspiring extras such as motivational quotes and audio readings of select stories are included.”

“Chicken Soup for the Soul shares happiness, inspiration and wellness in everything we do and we are excited to bring our stories to people in a new and exciting way,” said Jonathan Brodsky, Vice President of Digital at Chicken Soup for the Soul. “This apps gives our readers and other fans the ability to dig deeper into our stories with thought-provoking questions and a personal journal. Readers can publicly share their response to each story and view other readers' comments building a supportive community within the app.”

About Oceanhouse Media, Inc.
Creators of the award-winning Dr. Seuss digital book apps, Oceanhouse Media, Inc. is a leading publisher of more than 300 mobile and desktop apps for iOS (iPhone®, iPad®, iPod touch®), Android™, NOOK Tablets™, Kindle Fire™, HP TouchPad™ and Windows 8 devices. The company was founded in early 2009 by Michel Kripalani, a veteran of the video gaming industry. Seventeen of the company’s apps have reached the number one spot within their categories on Apple’s App Store℠. In addition, Google has selected the company as one of its Top Developers, a designation granted to only 150 groups worldwide.