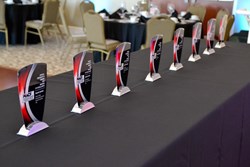 The annual Awards for Excellence in manufacturing and supply chain performance recognizes the hard work and dedication of the people in this industry.

Hernon Manufacturing, the innovator in adhesives, sealants and dispensing equipment, is pleased to announce that its Sales and Marketing Director, Edgardo Rodriguez, was recently awarded the 2013 Manufacturers Association of Central Florida’s (MACF) Presidents Award.

The award categories honor recipients from the following categories:

All of the Candidates for the MACF Awards of Excellence were nominated from the local manufacturing community, with the exception of the President’s Award and Outstanding Contributors, which was chosen by Ken Brace, the MACF Board President. All nominated companies and individuals needed to be members in good standing of MACF.

"The Annual Awards for Excellence in manufacturing and supply chain performance are yet another way that MACF brings our community together and recognizes the hard work and dedication of the people in this industry," said Edgardo Rodriguez, Hernon Manufacturing’s Director of Sales and Manufacturing. "I am honored to accept the MACF President’s Award."

During the event, in addition to the awards being presented, the keynote speaker, Dustan McCoy, CEO of Brunswick Corporation discussed the future of manufacturing.

Edgardo Rodriguez has been with Hernon Manufacturing for the past three and one half years. During that time his tenacity and drive has propelled the company to new heights including a 32% increase in annual revenues last year. The company employs 40 people within its manufacturing and research laboratory in Sanford, Florida. Rodriguez is an active member of the MACF.