Best Western will open its second hotel in Dhaka, Bangladesh at the airport. The BEST WESTERN PLUS hotel is scheduled to open in Q2 2014. 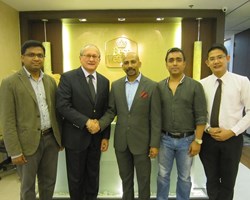 “With a population of more than 160 million people – the eighth largest in the world - and a fast-growing manufacturing industry, Bangladesh is becoming an increasingly important regional and global player,” said Best Western's Glenn de Souza.

Best Western International(BWI) has signed a new agreement that will see it touch down at Dhaka airport for the first time.

Currently under construction, the hotel will operate under the upscale BEST WESTERN PLUS product when it opens in the second quarter of 2014. All 56-rooms will include international amenities such as comfortable beds, flat-screen TVs with satellite channels, minibars, tea and coffee making facilities and complimentary Wi-Fi.

The hotel will feature an all-day restaurant serving local and international dishes, a bar, fitness center, sauna, steam room and spa. There will also be a rooftop barbecue outlet.

BWI’s Vice President of International Operations for Asia and the Middle East, Glenn de Souza, said the new hotel was perfectly positioned to cater to Bangladesh’s rising number of inbound and outbound travelers.

“With a population of more than 160 million people – the eighth largest in the world - and a fast-growing manufacturing industry, Bangladesh is becoming an increasingly important regional and global player,” Mr. de Souza said.

“We are delighted to be able to offer a brand new international hotel located on the doorstep of the country’s main air gateway. I am confident that this exceptional new property will be extremely popular with the rising number of local and international air travelers flying in and out of the country,” he added.

Dhaka’s Hazrat Shahjalal International Airport handled 5.6 million passengers in 2012, but this is expected to rise rapidly in the coming years, with new airlines entering the market and more international carriers targeting Bangladesh.

For BWI, the new BEST WESTERN PLUS hotel will be its second in Dhaka, following the 51-room BEST WESTERN La Vinci Hotel. But the company expects to expand further across Bangladesh with plans for at least three hotels in the coastal destination of Cox’s Bazar.

Best Western first launched in Asia and the Middle East in 2001 and now covers 27* countries in the region. For more information on global development opportunities with Best Western International, please visit bestwesterndevelopers.com.

ABOUT BEST WESTERN INTERNATIONAL, INC.
Best Western International, Inc., headquartered in Phoenix, Ariz., is a privately held hotel brand made up of more than 4,000* BEST WESTERN®, BEST WESTERN PLUS® and BEST WESTERN PREMIER® hotels in more than 100* countries and territories worldwide. Now celebrating 67 years of hospitality, Best Western welcomes hundreds of thousands of guests nightly. Best Western provides its hoteliers with global operational, sales, marketing and promotional support, and online and mobile booking capabilities. More than 20 million travelers are members of the brand’s award-winning loyalty program Best Western Rewards®, one of the few programs in which members earn points that never expire and can be redeemed at any Best Western hotel worldwide. The brand’s partnerships with AAA/CAA, race car driver Michael Waltrip, and Harley-Davidson® provide travelers with exciting ways to interact with the brand. In 2012, Best Western won a record number of awards, including AAA’s Hotel Partner of the Year, CAA’s Partner of the Year, TravelClick’s eMarketer of the Year and Compuware’s Best of the Web Gold awards.

For more information or to make a reservation, please visit bestwestern.com.

*Numbers are approximate and may fluctuate.