In survey of over 150 agency executives, media buyers estimate that 22% of the ad impressions in video ad buys are fraudulent and 32% are not viewable. 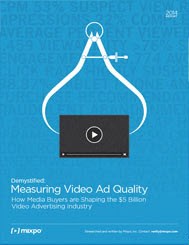 Multiscreen video advertising solution provider Mixpo today announced the release of a 2014 industry brief: Demystified: Measuring Video Ad Quality. Based on survey responses from over 150 agencies, this report evaluates how media buyers use measurement of fraudulent impressions and viewability to optimize ROI on video ad media buys. It is available for download at: http://mixpo.co/VideoAdQuality.

Adweek recently reported that “suspicious web domains cost online ad businesses $400 million per year” in wasted video ad impressions. Maintaining quality control across the diverse and expansive set of media suppliers will be daunting but vital as the online video ad market continues to grow its share of advertising dollars. Mixpo surveyed over 150 Media Buyers from agencies of all sizes who managed video advertising campaigns in 2013 to find out how they value and measure impression quality.

“Because of the high CPMs in video and the fact that demand far outstrips supply for video ad inventory, the best of the best of the fraudsters are taking on the Video Advertising Industry,” said Brian Cohee, SVP of Data Sciences at Mixpo. “Look for a vendor who can substantiate viewability (was your video ad watched?), detect fraud (was it “watched” by a person or a bot?), and assess the overall quality of the inventory.”

This report will help marketers get up to speed fast. To download a complimentary copy, please visit: http://mixpo.co/VideoAdQuality.

About Mixpo
Mixpo enables media companies and agencies to execute cross-screen, cross-social video ad campaigns. Our video ad products are polished, innovative, and can be tailored or created from scratch. Set up is fast whether we teach you to do-it-yourself or you utilize Mixpo as a managed service. We furnish the industry’s most comprehensive analytics, powered by big data, including ad verification and campaign performance segmented by DMA, audience, and mobile device.

Mixpo works with 70 of the top 100 advertisers in the US. In 2013, Forbes named Mixpo one of America’s Most Promising Companies and made Deloitte’s Technology Fast 500 list. The IAB selected Mixpo as a winner of its 2013 Digital Video Rising Stars competition. Mixpo is headquartered in Seattle, with offices in New York, Boston, and Victoria BC.