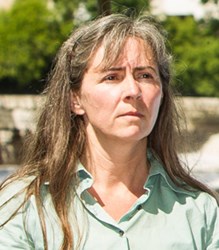 She has been instrumental in directing an unprecedented collaboration among the Penobscot Indian Nation, seven conservation groups, hydropower companies and state and federal agencies to restore the river’s ecosystem, while maintaining energy production.

The Atlantic Salmon Federation (ASF) is pleased to announce that Laura Rose Day of Hallowell, ME has been selected as the 2013 recipient of the Lee Wulff Atlantic Salmon Conservation Award. The award was presented by Christopher H. Buckley Jr., Chairman of ASF’s U.S Board of Directors, at a meeting in New York City.

“Laura has been involved in every aspect of the project from direct negotiations with the dam owners to purchase the dams, to helping raise $60 million in public and private funds,” said Mr. Buckley. “She has been instrumental in directing an unprecedented collaboration among the Penobscot Indian Nation, seven conservation groups, hydropower companies and state and federal agencies to restore the river’s ecosystem, while maintaining energy production. She kept everyone working together through both the challenges and celebrations.”

Trained in environmental and energy law and wildlife management, Laura Rose Day moved to Maine in 1998 to become the Watershed Program Director at the Natural Resources Council of Maine. In that capacity, she worked on completion of the Edwards Dam removal on the Kennebec River, helped found Maine Rivers, and began working with ASF and other partners on the Penobscot Restoration Project in 1999. After first coordinating the conservation partners’ efforts, she eventually took on the leadership of the Penobscot River Restoration Trust, the non-profit organization formed in 2003, to take ownership of three dams and implement restoration work to open passage for Atlantic salmon and several other native sea-run fish.

Rose Day oversaw the purchase of the Great Works, Veazie, and Howland Dams in 2004.

“The lower Penobscot flows freely today due to the passionate, persistent efforts of countless anglers, philanthropists, public servants, elected officials and other citizens who appreciate the importance of the Penobscot River to Atlantic salmon recovery,” said Rose Day. “I am fortunate to play a role at this important moment in the restoration of this great Atlantic salmon river, the Penobscot. I am honoured to accept the Lee Wulff award as a testament to the remarkable private-public partnership that is the Penobscot River Restoration Project. I applaud ASF’s steadfast leadership, ranging from helping open the mainstem Penobscot and its tributaries to benefit all river life, to addressing worldwide threats to Atlantic salmon.”

The Great Works Dam was removed in 2012 and the Veazie Dam removal is now nearly complete. As a result, the lower Penobscot River is running free for the first time in nearly 200 years. The Howland Dam will be decommissioned and bypassed by 2015, one more step on the road to achieving significant ecological, cultural, recreational, and economic benefits throughout New England’s largest watershed.

The Lee Wulff Award is presented annually in his memory. Lee Wulff was an angler, artist, author and filmmaker, who dedicated 60 years of his life to conserving wild Atlantic salmon and advocating live release angling to help safeguard their future.