Eighty-six thousand young people have experienced life in Israel through Masa, including a record 11,000 this year. Ninety-two percent say they feel a part of the Jewish people, 85% say caring about Israel is an important part of their Jewish identity, 79% Say being Jewish is important to them. 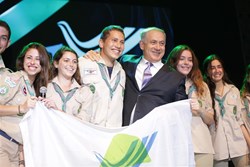 Prime Minister Benjamin Netanyahu poses with his son, Avner, and fellow participants in Garin Atid, a program in which young Jews from Israel and abroad live together as part of Masa Israel Journey, a

Prime Minister of Israel Benjamin Netanyahu and Chairman of the Executive of The Jewish Agency for Israel Natan Sharansky addressed 3,000 Masa Israel Journey participants at a 10-year celebration in Jerusalem yesterday evening.

"This year, a record 11,000 young people will participate in Masa Israel Journey, a partnership of the Government of Israel and The Jewish Agency. You have dedicated a year of your lives to live in Israel,” Netanyahu said. “You came here from many lands to this land, and this is your land. This is your home. Israel is always your home. This is the meaning of Masa."

During his speech, the Prime Minister invited his son, Avner, onto the stage along with his fellow participants in Garin Atid, a Masa Israel Journey program that is a partnership between the Tzofim (Israel Scouts) and Young Judaea, in which young Israelis and Jews from abroad spend the year living together.

A record 11,000 Jewish young people from 62 countries will participate in long-term Israel experiences this year as part of Masa Israel Journey, a joint project of the Government of Israel and The Jewish Agency, which is celebrating its tenth anniversary this year. This marks a significant increase from the 4,000 participants from 30 countries who arrived in Israel during the program's inaugural year. Masa participants spend between a semester and a year in Israel in more than 200 programs, including professional internships, volunteer experiences, academic courses, and Jewish study programs.

Masa Israel Journey was established in 2004 by the Government of Israel and The Jewish Agency in an effort to strengthen the Jewish identity of young people around the world and deepen their connections to Israel. The initiative enables young Jews between the ages of 18 and 30 to spend a significant period of time in Israel in a vast range of programs. Some 86,000 participants from 62 countries have participated in the program thus far.

"All of you are part of this family, part of this country,” Sharansky said. “The Masa Israel Journey experience strengthens and enriches the participants themselves, the State of Israel, and the entire Jewish people. The 86,000 young people who have experienced life in Israel through Masa will make up the core of Jewish leadership for decades to come. All of you are young leaders of our people."

Masa Israel Journey has a significant, measurable impact on the Jewish identity of young people from around the world and strengthens their ties to Israel. According to a study conducted by noted sociologists Steven M. Cohen and Ezra Kopelowiz, 92% of Masa alumni say they feel a sense of belonging to the Jewish people, 85% say caring about Israel is an important part of their Jewish identity, 82% say raising their children as Jewish is important to them, 79% say being Jewish is important to them, 71% say they have engaged in Jewish educational activities since returning from Israel, 64% say they have volunteered in a Jewish organization since returning, and 45% say they have considered becoming Jewish communal professionals. "The apparent impact of Masa Israel is profound in ALL areas of Israel-related and Jewish engagement," Cohen and Kopelowitz concluded.

Masa participants have contributed some one million volunteer hours to Israeli society, strengthening the Israeli education system, working with at-risk youth, helping new immigrants become acclimated to their new home, serving in Israel's socioeconomic periphery, and contributing in a range of other ways. In addition, thousands of participants contribute their professional expertise to the Israeli economy, working in high tech incubators, startup companies, venture capital firms, government ministries, and a variety of other workplaces. Some 20% of participants opt to make Aliyah (immigrate to Israel) upon completing the program.