The Buffalo Bill Center of the West’s "Papers of William F. Cody" has received $200,000 from the National Endowment for the Humanities (NEH) to continue its work collecting, editing, and publishing documents related to the lifespan of William F. “Buffalo Bill” Cody. 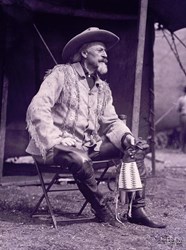 ...the number of materials available about Cody’s life [is] incalculable.

The NEH grant enables the "Papers of William F. Cody" to fund salaries and research fellowships for its growing online archive at CodyArchive.org and its digital interpretive site at CodyStudies.org. The Papers collaborates with scholars and professional staff at Brigham Young University, University of Nebraska-Lincoln, and Ball State University.

By most accounts, William F. “Buffalo Bill” Cody was the most recognized celebrity in the world at the turn of the twentieth century. With his Wild West extravaganza that brought the West to the world, Cody established relationships with everyone from kings and queens to the cowboys in his show. As a result, he wrote a myriad of notes, memos, articles, letters, and a couple of autobiographies in his lifetime—and his life and times generated even more press—making the number of materials available about Cody’s life incalculable.

For example, Johnston notes that when Buffalo Bill’s Wild West toured Europe in 1887 and 1889, audiences in Great Britain and Germany were especially taken by the show, and their experiences shaped impressions about America before World War I.

“After a visit to Buffalo Bill’s Wild West, Europeans developed the idea that ‘cowboys could save the day,’” Johnston continues. “The idea was furthered by President Theodore Roosevelt’s visit to Europe in 1910, when the ‘touring cowboy’ met with Kaiser Wilhelm II of Germany who then remarked that Roosevelt could shoot just like Buffalo Bill. Since the Wild West may have been the only connection to America that most foreign audiences had, it launched a host of political, social, and cultural implications. That’s an important part of the work of the Papers of William F. Cody.”

Since December 2012, the Papers has received in excess of $1.9 million from private donations, state funds, and federal grants. Associate Editors are located at nine educational institutions and have scanned more than 40,000 documentary and photographic images from collections held by the Center’s McCracken Research Library, and 20,000 more from online databases and research conducted worldwide. Students, researchers, and history buffs can access the material at CodyArchive.org developed by the Center for Digital Research in the Humanities, and CodyStudies.org. developed by Senior Digital Editor Dr. Doug Seefeldt at Ball State University. Finally, the Papers has an ongoing partnership to publish firsthand accounts through the University of Nebraska Press, and scholarly monographs through the University of Oklahoma Press.

“We are grateful for these latest funds toward our ongoing efforts,” Johnston adds. “In doing so, we can reveal a more complete picture of Cody and his life and times from a transnational perspective.”

Since 1917, the Buffalo Bill Center of the West in Cody, Wyoming, has been committed to the greatness and growth of the American West, keeping western experiences alive. The Center, an affiliate of the Smithsonian Institution, weaves the varied threads of the western experience—history and myth, art and Native culture, firearms, and the nature and science of Yellowstone—into the rich panorama that is the American West. The Center of the West has been honored with numerous awards, including the prestigious 2012 National Tour Association’s Award for “favorite museum for groups,” the 2013 TripAdvisor Certificate of Excellence, and most recently, one of the “Top 10 Must See Western Museums” by True West magazine.

The Papers of William F. Cody: About us