On Saturday November 16, members of the anti-circumcision activist group INTACTION http://www.intaction.org picketed outside the home of Susan Blank, M.D., chairperson of the American Academy of Pediatrics Task Force on Circumcision. 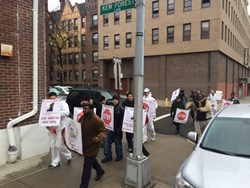 Members of the anti-circumcision activist group INTACTION picketed outside the home of Susan Blank, M.D., chairperson of the American Academy of Pediatrics Task Force on Circumcision.

The European medical groups’ response to the AAP report (Pediatrics 2012-2896 March 18,2013) states, “Seen from the outside, cultural bias reflecting the normality of non-therapeutic male circumcision in the United States seems obvious, and the report’s conclusions are different from those reached by physicians in other parts of the Western world, including Europe, Canada, and Australia. There is growing consensus among physicians, including those in the United States, that physicians should discourage parents from circumcising their healthy infant boys because non-therapeutic circumcision of underage boys in Western societies has no compelling health benefits, causes post-operative pain, can have serious long-term consequences, constitutes a violation of the United Nations’ Declaration of the Rights of the Child, and conflicts with the Hippocratic Oath: First, do no harm.”

The picketers are enraged over the recent news reports (WMCTV-5, November 6, 2013) from Memphis TN that baby Ashton Rhodes was severely disfigured by his doctor during circumcision. His mother Maggie Rhodes stated, "When he was in the room, he was screaming like life and death like, like there wasn't no tomorrow, when she pulled back the cloth, like the thing (penis) was like gone.” Maggie Rhodes was following her doctors advice that circumcision would be beneficial for her son. Intaction holds Dr. Blank and the other members of the AAP Circumcision Task Force partly responsible for this alleged needless and tragic genital mutilation as doctors and parents rely on the AAP’s policy for guidance.

“No man ever consented to be circumcised as an infant, yet they have had to live with the consequences all of their lives,” said Intaction Executive Director Anthony Losquadro. “The AAP has flip-flopped with its advice about circumcision seven times over the last 30 years. Now the AAP convened yet another task force with an agenda to change policy based on shaky newfound evidence. Medical experts worldwide, backed by substantial medical research, question the benefits of circumcision, especially when compared to the harm many males have experienced. We are demanding answers from Dr. Blank on behalf of all the men and babies who have experienced harm at the hands of American medical professionals.”

The Intaction protesters include people of varying religious backgrounds, including Catholic, Jewish, and Protestant. “98% of circumcisions done in America are for non-religious quasi-medical reasons, that is what we oppose. We have no desire to interfere with anyone's practice of their religious beliefs.” said Anthony.

Furthermore, the AAP report specifically recommends that insurance companies and Medicaid fund infant circumcision to give access to the “health benefits” to all. “We in Intaction believe it is about financial gain for the medical industry, unfortunately,” said Intaction member Gary Costanza. With decreasing reimbursement rates by government and insurance companies, doctors are trying to hold ground on billable charges by exploiting a baby boy’s anatomy.

Some of the health benefits listed by the AAP, and refuted by the European physicians, include the supposed prevention of penile cancer, HIV, other sexually-transmitted diseases, and urinary tract infections (UTI). Of those issues, the European physicians said that UTI’s are the only issue that circumcision may actually reduce, but noted that UTI’s are uncommon for boys, and can easily be treated with antibiotics instead. “The other claimed health benefits are also questionable, weak, and likely to have little public health relevance in a Western context, and they do not represent compelling reasons for surgery before boys are old enough to decide for themselves. Circumcision fails to meet the commonly accepted criteria for the justification of preventive medical procedures in children,” states the response from the European doctors.

“Many Americans inaccurately believe that male circumcision is not as serious as female genital mutilation, and that the foreskin is just a useless piece of skin,” said Intaction’s David Grant. “This is simply not true. The foreskin and frenulum, which is similar to the clitoris, has millions of nerve endings that increase a man’s sexual pleasure, it protects the glans, offers immune system response, and provides friction that increases a female partner’s sexual pleasure. Nature and evolution doesn’t make design mistakes, and it is foolish for doctors to think they can improve on nature’s design.”

“Even the studies that claim that circumcision limits diseases only show a small benefit, like a one percent decrease or increase,” said protester Michael Huebner . “Even I can do the math to see the supposed benefits do not outweigh the potential consequences, and I’m not a scientist. These babies have a human right to stay the way nature intended. If they want to be circumcised later in life, that should be their choice.”