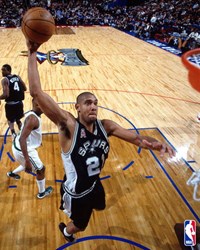 Hey it’s November already! And what a wonderful time of year it is. There’s hockey. There’s football. There’s basketball. And soon, there’ll be butterball. What's not to like?

Fans across the country are responding, sending ticket sales for all major sports off on a fast break, according to Felina Martinez at online ticket marketplace BuyAnySeat.com.

The 68th NBA regular season hit the hardwood three weeks ago and is now 10 games into the 82-game schedule. While the San Antonio Spurs are on top of the CBS Sports Power Rankings, the leading ticket sellers are the New York Knicks, Brooklyn Nets, Miami Heat, Dallas Mavericks and Houston Rockets.

The top rated Spurs have won seven in a row, and are playing the machine-like ball fans have come to know and love. The Indiana Pacers, also at 9-1, are second in the rankings, while the Miami Heat, Portland Trailblazers, Golden State Warriors, Los Angeles Clippers, Oklahoma City Thunder, Minnesota Timberwolves, Houston Rockets and Chicago Bulls round out the top ten.

"That’s why we’re proud to offer sports fans the most comprehensive and continuously updated selection of sports tickets online, with a worry-free guarantee to protect their purchase.

"To access the full line-up of NBA Basketball tickets now available, customers can go to BuyAnySeat.com and click on the NBA icon – then select their team and their tickets," said Martinez.

The NBA regular season is set to run through April 16, 2014, followed by the playoffs and finals in June – just as MLB Baseball is heating up their 162-game regular season. The 2014 NBA All-Star Game will be played on February 16, 2014, at the New Orleans Arena in New Orleans, Louisiana.

During the offseason, 13 teams made coaching changes. The New Orleans Hornets became the New Orleans Pelicans. And, the Charlotte Bobcats will become the Charlotte Hornets again for the 2014–15 season – and for the first time since the 2001–02 season.

The Cleveland Cavaliers won the #1 draft for the second time in three years and tapped Anthony Bennett of UNLV. The NBA also officially implemented a tournament system in both of their Summer League systems. The Oklahoma City Thunder and Golden State Warriors were the inaugural champions of the Orlando and Las Vegas Summer League Tournaments respectively.

Last year, the Heat led the league with a 66-16 record and .805 winning percentage. The New York Knicks Carmelo Anthony had the most points average per game at 28.7. LeBron James took home the season MVP, led the league in Efficiency Per Game with a 31.6 rating, and scored a season-best seven Triple-Doubles.

An online ticket marketplace, BuyAnySeat.com connects sports, theater and other live entertainment fans to an extensive network of ticket sellers worldwide. The site’s simplified listings and navigational tools enable shoppers to easily locate, compare and purchase inexpensive, discounted or lower-priced tickets to virtually all advertised sports and entertainment events around the globe.