JildyT Releases Cover and Video of the Dixie Chicks, Not Ready to Make Nice, Nov 15, 2013 in Los Angeles Bringing Awareness to Domestic Violence

JildyT is a pop rock vocalist, signed to the Hollywood based record label Hollywood Hippie Records. She is on a mission to bring an awareness to social, environmental and domestic issues. 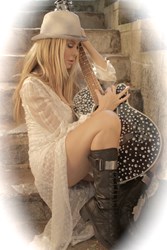 Why is there ever this perverse cruelty in humankind, that makes us hurt most those we love best?― Jacqueline Carey

Artist JildyT with Hollywood Hippie Records globally released her rendition of Dixie Chicks, "Not ready to make nice," cover and video this past week. JildyT is known for her relentless dedication to bringing awareness to the issues of domestic violence. She is a strong supporter of the Jenesse Center, Inc. the oldest domestic violence intervention program and shelter in Southern California. Based in Los Angeles, JildyT urges you all to try and make a difference. Be aware of others less fortunate and contribute what you can. JildyT's motto is "Healing and helping one person at a time can make the world a better place."