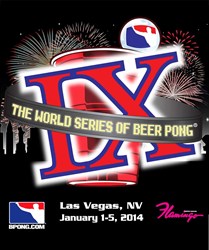 The World Series of Beer Pong is an event unlike any other, with fierce beer pong competitors from across the globe all vying for the top spot, you truly have to see it to believe it. ~Billy Gaines, BPONG.COM Founder & CEO

The 2014 WSOBP is expected to draw up to 1,000 players from across the United States and over a dozen countries. Cups will be racked, balls will be tossed, and friendships will be tested, all in the name of the largest beer pong competition in the world!

WSOBP rules allow for play with beer, water or another liquid, although for logistical reasons, The WSOBP IX will follow suit with most bars who run tournaments and will play with water in the cups. The WSOBP will be played with water to further foster the growth of the sport by eliminating the potential issues of showing beer on air, thus allowing the sport to be aired across television networks and in the media. During play, two-person teams stand at opposite ends of an 8-foot-long table, where ten 16-ounce cups, filled with roughly 4 ounces of water, are placed in a bowling-pin formation. Each team takes turns tossing beer pong balls (similar to table tennis balls) at their opponent's cup formation. If a ball goes into a cup, the cup is removed from the game. The first team to eliminate all of its opponent's cups wins.

When all the games have been played, the last team standing will claim the title of Beer Pong World Champion and take home its share of the prize pool. To date, BPONG.COM and The World Series of Beer Pong have awarded over $500,000 in cash prizes.

On top of the main competition play and spectator event, BPONG.COM is also known for hosting exciting side events that players and spectators alike can participate in, including a CoEd tournament, requiring each team to have one male and one female player, and a random partner tournament, which gives players from around the world the chance to get randomly paired with a player and meet new people.

Players interested in competing in The WSOBP IX must register online by the December 10, 2013 deadline. Player packages currently start at $499. All packages are priced per person and include a four-night hotel stay at Flamingo Las Vegas as well as entrance into The WSOBP IX main event, which includes a guaranteed minimum of 12 games of play.

ABOUT THE WORLD SERIES OF BEER PONG:
The WSOBP was founded in the name of beer pong players across the world, for the purpose of establishing the finest competitions, issuing the largest prizes, and determining conclusively the team that is the Beer Pong World Champion. The WSOBP strives to further the cause of beer pong, internationalize the game, maintain a tournament-standard set of rules, promote responsible beer pong playing, legitimize its status as a sport, and throw an epic party in the process. To date, over $500,000 in prizes has been awarded at The WSOBP tournaments. For more information or to register, visit http://www.bpong.com.

For more information on the event or an interview with Founder and CEO, Billy Gaines, contact Amanda Flood at (702) 706-8389 or amanda(at)bpong(dot)com.