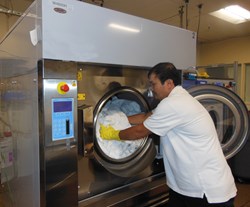 Electrolux played a key part in the technology. They stood out in the selection of technology available.

When one thinks about the highlights of a hotel property, they’ll mention amenities, restaurants, and overall service. The on-premises laundry room likely doesn’t figure into even the top 100 features.

But if your business is efficiency and turning a property into the pinnacle of green lodging, the laundry room certainly might warrant top billing.

That’s just the case at the Hilton Concord (http://www.concordhilton.com/) in Concord, Calif. This 329-key Interstate Hotels & Resorts Worldwide (http://www.interstatehotels.com/) property recently completed a $10 million dollar upgrade that focused heavily on sustainability. And the result is a hotel transformed into the standard for efficiency.

Sustainability flagship
Lead consultant on the project, Charles Smith, CEO of Hotel Sustainability Solutions Inc. (HSSI) (http://www.hotelsustainabilityinc.com/) said that from the start, the charge was to place the property in a leadership position in terms of sustainability. And in looking at the results, the mission is being accomplished.

“This hotel is light years ahead of the competition,” Smith said, adding that the outcome is the culmination of extraordinary integration, collaboration and cooperation.

Make no mistake, this was an extensive effort and one that involved addressing all facets of the facility. It included incentives and rebates from utility provider Pacific Gas and Electric (PG&E), Smart Lights and Lodging Savers, as well as the Contra Costa Water District.

But whenever peers or Interstate personnel want to learn about the property, the laundry makeover gets top billing.

“The laundry really is one of the highlights whenever anyone wants to see the property,” Smith said.

Owner of Roseville, Calif-based A2Z Laundry Systems, Ahmet Ibrahim, who spearheaded the installation of cutting-edge Electrolux laundry equipment at the hotel, views this facility as the new green lodging standard as well.

“This is our model for efficiency,” Ibrahim said.

Winning the battle in the planning
As the hospitality market began to uptrend, finding a sustainability solution became ever more critical. Becoming the model of efficiency, however, would take some work. The current state of the laundry was rough. Equipment was dated and repairs were mounting...when parts actually could be found to make the fixes. One dryer even had been taken out of service. Still, laundry loads were being processed daily, but the true cost of this dated equipment soon would be uncovered.

As HSSI began the task of evaluating options, key factors considered were the efficiency of the equipment, availability of rebates or incentives, distributor/manufacturer service and support, and the ability to upgrade equipment in the future — ensuring a long useful life and thereby protecting the initial capital investment.

Though Smith looked at a variety of laundry equipment manufacturers, the goal of creating the model of efficiency guided selection. That meant choosing a brand that delivered on its efficiency claims and had the numbers to prove it.

“Electrolux played a key part in the technology,” Smith said. “They stood out in the selection of technology available...their prominence caught our attention.”

Electrolux’s global leadership is evident in it being named to the Dow Jones Sustainability World Index in 2012. It was the sixth-straight year the firm made the prestigious list, which places it in the top 10 percent of the 2,500 companies in the Dow Jones Global Indexes with regard to long-term economic, environmental and social performance.

Wash efficiency leads the way
The Hilton Concord had been using soft mount washers in the laundry and Smith was committed to staying with this product type because of its high G-Force extraction speed versus hard mounts. Soft mounts also were preferable because they don’t require an additional concrete foundation to bolt to. However, lower installation costs and high G-Force extraction would not be enough. Water conservation, utility consumption, and operational efficiency were equally important.

This is the point where Electrolux separated itself from the competition.

Oddly enough water savings started at the drain. The Electrolux soft mount units (two 145-pound capacity and one 60-pound capacity) Ibrahim was recommending for the Hilton featured a unique pancake drain that helps reduce water consumption during fills. The hotel’s existing units as well as competitive models on the market can waste as much as 2 gallons of water per fill because they include a large sump and drain hose in the fill. Electrolux models utilize a pancake valve to keep the fill area confined to the wash cylinder.

Considering a standard of five to six fills per cycle, savings total 10 to 12 gallons per cycle. Overall, the Hilton Concord is saving 192,960 gallons of water annually in the laundry. When added to the savings realized through guest room improvements such as low-flow shower heads and toilets as well as other conservation efforts at the property, water savings total more than 525,000 gallons per year.

Savings grew with the addition of an ozone system. Ozone, when injected into the wash cylinder, increases the effectiveness of laundry chemicals, thus requiring smaller dosages, and eliminating the need for hot water. Linens also emerge smelling fresher and softer compared to a normal hot water wash cycle.

The majority of the cost of the ozone system was offset through rebates from PG&E and the Contra Costa Water District — the first ever offered by the district.

Drying efficiency
On the drying side, an agreement was reached on five 83-pound capacity Electrolux dryers to replace the dated complement of two 150-pound and two 110-pound units. Though drying capacity went down, the speed and efficiency of the Electrolux dryers combined with the high extract G-Force of the washers enable the laundry to process more loads per day (9.78 loads versus 7.81).

“The overall result of the higher extraction rate allowed us to go with smaller dryers and really spread out the loads,” Smith said, adding that the additional capacity contributed to reaching the goal of greater operating efficiency — making staff more productive.

Electrolux’s moisture sensing technology, which enables the units to dry to a set moisture retention level and then shut off the heat, further increased efficiency.

With the majority of a laundry’s gas consumption coming on the drying side, this is where the Hilton Concord saw a huge reduction in utility usage and costs. Combined with the 90 percent reduction in hot water usage, the laundry is consuming almost half the Btus as it did with the old equipment.

“There is a dramatic drop...Btus are so much lower and there’s a huge amount of savings,” Ibrahim said, adding that the laundry will see roughly $8,400 in gas savings annually. He pointed out that the Electrolux dryers derive their efficiency advantage from a unique horizontal airflow pattern as well as their reversing cylinder — a standard feature on 120-volt units, which is an industry exclusive.

Linens benefit from the reduction in drying time. The drying process degrades linens, causing them to wear out faster. So because more water is spun out in the washer and ozone injection opens linen fibers, only short dry cycles (or conditioning cycles before linens are ironed) are used, linen life is extended. Table linens even go directly from the washer to the ironer, with no drying necessary.

And all this improved efficiency on both the wash and dry sides equates to a startling reduction in electrical consumption. The laundry is using about a third of the electricity as it did before the retooling.

Savings such as these, however, are only part of the green story. Because of the involvement of water and utility entities, $135,360 in rebates and incentives have helped offset purchase and installation of new laundry equipment and other efficient products, systems and technologies.

Adapting the process
Smith is careful to point out that, while the Electrolux equipment takes much of the risk of operator error out of the equation, retraining staff is integral to maintain efficiency.

“The biggest challenge was re-educating people. We had to break some bad habits,” Smith said.

Part of that retraining includes weighing loads to make sure employees always are utilizing the full capacity of machines. Washers and dryers that are underloaded waste utilities and that cuts into the efficiency of the operation. In addition, staff also was taught that a little bit of moisture is OK for linens; they don’t need to be bone dry.

Manivone Khangsensing, Executive Housekeeper at the property is quick to point out that the retraining, coupled with the ease of operating the new Electrolux equipment has been well received by staff.

“People liked that we lightened their burden,” Khangsensing said of ridding the laundry of manual overrides and training employees to trust the advanced software technology. “It provides for ease of operations; there’s nothing complicated about it. The reaction has been very positive.”

Much of that positive reception stems from the operational efficiency of the laundry versus lower productivity with the old equipment. Capacity is much improved with the speed, efficiency and reliability of the Electrolux models, which eliminates worker stress. Plus the work environment has been improved with Cree LED Troffers strategically installed where equipment is located.

Advice for others
For hoteliers pondering similar projects to increase the overall sustainability of their operation, Smith stresses taking time upfront to focus on planning. He recommends carefully analyzing the property to determine where the greatest efficiency may be gained. Then, it’s a matter of investigating the potential to offset upgrades through rebates and incentives.

When it comes to the laundry, obviously equipment that reduces water and utility consumption is the key focus, but Smith also recommends not to take efficiency boasts at face value. Review and analyze numbers. However, his experience may save some time in auditioning manufacturers.

“I think you have to take a serious long hard look at what Electrolux brings to the table,” he said. “If you’re looking for sustainability, you have to look at Electrolux.”

Smith added, that In today’s technological revolution, it is important to select products and systems that can be upgraded within the expected life cycles of ownership. Electrolux’s commitment to those upgrades garnered the attention of the hotel’s management.

Finally, he advises that a strong warranty on equipment is important and it must be backed by excellent support from the local distributor and company — both are areas where A2Z Laundry Systems and Electrolux have shined in helping the Hilton (http://www.hiltonworldwide.com/) Concord’s on-premises laundry room become a highlight of the property’s sustainability efforts.

“The retrofitting of the laundry room was a much-needed and important part of our sustainability platform,” said Jack Hlavak, General Manager of the Hilton Concord. “Uptrending in the hospitality market necessitated a higher commitment to the guest experience...we are now delivering the pinnacle of linen quality and that is showing in our improved guest satisfaction ratings here at the Hilton Concord.”