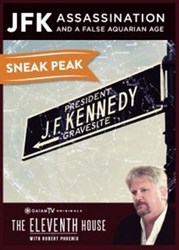 Gaiam TV is excited to provide content that looks at unique perspectives on the most important stories of our times.

Countless theories and claims surrounding the assassination of President John F. Kennedy have been explored in the media over the last 50 years, and now astrologer and broadcast host Robert Phoenix shares his interpretation of how the star charts reveal the big picture in the Gaiam TV special The Eleventh House found here.

“The murder of JFK signaled the end of an astrological era and its potential for an age of enlightenment, and the start of another timeline I call the pseudo Age of the Aquarius,” said Phoenix, host of The Eleventh House, a Gaiam TV exclusive.

The program’s title is a reference to November, the 11th month in the calendar, a time in astrology signified by friendship and destiny, and the month JFK was shot to death in Dallas.

“Gaiam TV is excited to provide content that looks at unique perspectives on the most important stories of our times,” said Paul Richardson, Gaiam TV vice president of marketing.

Now Gaiam TV is offering a free 10-day trial to explore The Eleventh House and the rest of its vast library of videos and movies. Those who wish to subscribe to the service pay just $9.95 per month, and may cancel membership at any time. Like Netflix, subscribers may stream content on demand for viewing with no limits and no commercial advertising. Gaiam TV is available on a variety of platforms including iPad, iPhone and Roku. Click here to try Gaiam TV for 10 days.