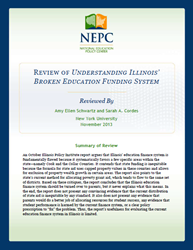 The report does not present any convincing evidence that the current distributionof state aid is inequitable by any standard.

URL for this press release: http://tinyurl.com/lr94r93

A report asserting that the Illinois system of funding public schools is “broken” and should be replaced by a system ”where parents control the flow and distribution of money” offers no evidence to support either its claims or its proffered solution, a new review published today finds.

Amy Ellen Schwartz and Sarah A. Cordes of New York University produced the new review, which is published today by the National Education Policy Center, housed at the University of Colorado Boulder School of Education.

Schwartz is a Professor of Public Policy, Education, and Economics at New York University and Director of the NYU Institute for Education and Social Policy. Her research examines issues in urban policy and education policy and finance. Sarah Cordes is a doctoral candidate at NYU whose research interests include public school finance, inequality, and school finance reforms.

The IPI report under review argues that because the Illinois education finance system appears to favor several counties in northeastern Illinois, the system is fundamentally flawed. Its argument rests on the provision of the state formula that caps property values in those counties, thereby limiting taxable wealth, and excludes from calculations growth in property wealth in certain areas. The IPI report also attacks the state’s method of allocating poverty grant aid, which tends to flow to the same set of districts.

“Based on this, the authors conclude that the education finance system should be turned over to the parents,” Schwartz and Cordes write.

The reviewers credit the report with providing some potentially helpful background on the Illinois General State Aid system for schools. They observe that it also “raises some legitimate concerns about the use of tax increment financing” – an economic development mechanism that earmarks growth in property tax revenue in designated zones for local infrastructure improvements rather than for all public goods, including education.

But, Schwartz and Cordes write, it falls seriously short both in its further analysis of the funding system and in its proposed remedy.

“The report does not present any convincing evidence that the current distribution
of state aid is inequitable by any standard,” the reviewers conclude. The report also fails to present “any evidence that parents would do a better job of allocating resources for student success … or a clear policy prescription to ‘fix’ the problem.”

“Thus, the report’s usefulness for evaluating the current education finance system in Illinois is limited.”

Find the review by Amy Schwartz and Sarah Cordes on the NEPC website at:
http://nepc.colorado.edu/thinktank/review-illinois-funding

The Think Twice think tank review project (http://thinktankreview.org) of the National Education Policy Center (NEPC) provides the public, policymakers, and the press with timely, academically sound reviews of selected publications. NEPC is housed at the University of Colorado Boulder School of Education. The Think Twice think tank review project is made possible in part by support provided by the Great Lakes Center for Education Research and Practice.

The mission of the National Education Policy Center is to produce and disseminate high-quality, peer-reviewed research to inform education policy discussions. We are guided by the belief that the democratic governance of public education is strengthened when policies are based on sound evidence. For more information on the NEPC, please visit http://nepc.colorado.edu/.

This review is also found on the GLC website at http://www.greatlakescenter.org/.