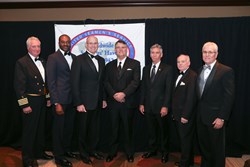 These crewmembers are true heroes and deserve to be recognized for their service. We are appreciative of the recognition from AOTOS and are happy to have been of assistance when it was needed most.

Crowley Maritime Corp. was presented with three prestigious Admiral of the Ocean Seas (AOTOS) awards during an industry dinner and dance held last week in New York City. Presented as part of the event’s Honored Seafarers Awards segment, which commends the heroism of American mariners who have risked their lives to save others and the outstanding seamanship of officers and crews of vessels participating in rescue operations, Crowley received the AOTOS Mariners’ Rosette Award and two Mariners’ Plaques.

Accepting the Mariners’ Rosette Award was Crowley’s Chief Engineer Keith Madding, who represented not only the company but also his fellow crewmembers, who helped to perform “a heroic rescue of a man who was struggling to stay afloat in the waters outside of the San Francisco Bay.” The early morning rescue took place in October of 2012 while the tugboat was standing by just outside the Bay from the Golden Gate Bridge, waiting to escort a tanker into anchorage. Crowley’s Perry Overton, captain of the Guard, noticed the man treading water a little more than a mile and a half from the bridge. Working quickly, the crew tossed the man a life ring and Madding donned a survival suit and entered the frigid 55 degree waters to help the fatigued man climb the Guard’s emergency ladder. Once aboard, the crew removed the hypothermic man’s wet clothing and wrapped him in warm blankets until the Coast Guard arrived and could perform other life-saving treatments.

“The entire Crowley family is proud of this brave crew for putting their training to good use to perform the vital measures needed to save this man’s life,” said the company’s Rocky Smith, senior vice president and general manager, petroleum distribution and marine services. “These crewmembers are true heroes and deserve to be recognized for their service. We are appreciative of the recognition from AOTOS and are happy to have been of assistance when it was needed most.”

The first AOTOS Mariners’ Plaque was awarded to the crew of the Crowley-managed M/V Ocean Atlas, owned by Intermarine LLC, in recognition of their efforts in “fending off multiple attempts by pirates to board the vessel while off the coast of Lamé, Togo” in Africa. Accepting the award on behalf of the company and his crewmates was Daniel Vonder Haff, chief mate of the vessel.

The piracy incident took place last November while the M/V Ocean Atlas was anchored three miles off the port of Lomé in a highly congested area waiting to receive fuel. The security team set up surveillance to ensure a safe perimeter while awaiting the arrival of the fueling vessel. During nighttime hours, six men on a skiff attempted to board the portside of the vessel but were spotted by the surveillance team, which in coordination with the crewmembers, prevented the pirates from boarding. When safe, the crew radioed the Togo navy to report the attack and request assistance. Following anti-piracy safety protocol, the crewmembers remained on the bridge while the security team guarded all vessel entry points. These measures prevented a second attempt to board the vessel 30 minutes later, this time by pirates in three separate skiffs. Throughout the remainder of the night, the crewmembers worked with the security team to keep surveillance on the pirate skiffs as they continued their attempts to board the ship.

“The crew’s performance in this high-stress situation showed its high level of professionalism and the value of Crowley’s anti-piracy, security and safety training,” said Nick Orfanidis, Crowley’s director of fleet operations. “They are true heroes and deserve to be recognized for their actions.”

The second AOTOS Mariners’ Plaque was accepted by Master Fred Walley, of the Crowley-managed, Maritime Administration (MARAD) Ready Reserve Force ship, S.S. Wright, on behalf of the company and his crew, for the “demonstrated extraordinary capabilities in their response to the Super Storm Sandy disaster relief mission.” Shortly after the storm, the S.S. Wright, along with fellow MARAD vessel Kennedy, relocated to Staten Island, NY, in support of the Federal Emergency Management Agency (FEMA) to provide cost-effective berthing and meals for more than 900 FEMA personnel and Red Cross relief workers, among others, daily. After being stationed in New York for more than a month, the S.S. Wright provided more than 4,000 overnight accommodations and over 15,000 meals.

“The rapid activation and deployment of the S.S. Wright to New York and success of the mission was unprecedented, thanks to the cooperation and joint effort of afloat and shore-side personnel,” said Crowley’s Michael Golonka, vice president, ship management. “The entire effort was a true testament of how Crowley – and the maritime industry as a whole – can offer relief during times of great need.”

All proceeds from the AOTOS event benefit United Seamen’s Service (U.S.S.) community services abroad for the U.S. Merchant Marine and those of other free countries around the world. Since 1942, U.S.S. has continued to provide community services for the U.S. Merchant Marine, the American Armed Forces, and seafarers of the world. U.S.S., a non-profit agency, which operates centers in eight foreign ports in Europe, Asia, Africa and on the banks of the Indian Ocean, and also provides seagoing libraries to American vessels through its affiliate, the American Merchant Marine Library Association.