The Second Annual Placencia, Belize Marathon and Half Marathon Kicks Off On December 8; Chip Lovett, the Events Creator and Organizer Reports On This Upcoming Event

"Join us for the second annual End of the World Marathon in Placencia, Belize," says Chip Lovett. "We are additionally very pleased that Rowan Garel and his family will be staying at Chabil Mar, one of our premier sponsors, and raising money for the Belize Council for the Visually Impaired." 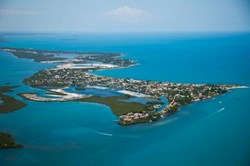 "Only the second year and we are so pleased by the outpouring of participation and support from Belize and the local community of Placencia", says Chip.

"We selected 'End of the World Marathon' as the title for our first year, 2012, to coincide with the festivities that were planned in Belize to celebrate the Maya culture here. We decided to keep it and embrace it, as have so many people in the country. Among our biggest supporters has been Chabil Mar Resort in Placencia Village. They have contributed their staff time to volunteer at Mile 1 Marker and are providing complimentary housing to Rowan Garel and his family, who will be here raising money for the Belize Council for the Visually Impaired."

"The Placencia Peninsula is ideal for mapping the course. It begins at the football field at the bottom of the peninsula, goes through Placencia Village, Seine Bight Village, and Maya Beach, with multiple views of the Caribbean Sea along the way. Each participant will receive a T-Shirt and a recyclable tote bag. Of course, awards and prizes will be given, totaling the equivalent of over $10,000. The top three males and females overall in the Marathon and Half Marathon will receive a cash prize and awards will also be given to the top three males and females in the following age categories: under 29, 30-39, 40-49, 50-59, 60 & over."

"We are so pleased to be able to celebrate our athletes and have so many join us from around the world who have come for the run and then stay for the fun in the Caribbean Belize wonderland of mystical Mayan temples, spectacular caves, pristine rainforests, and the second largest barrier reef in the world."

Proud Sponsors of the Placencia, Belize Marathon and Half MarathonChabil Mar Resort, Placencia Belize - Beauty by Belize, Luxury by Design