Can a Movie Change the World? 3 Magic Words Are Having People Look at Life from an Entirely New Perspective

Filmmaker Michael Perlin went against all odds to become the first Metaphysical Filmmaker in Hollywood. There is timeless wisdom in his new movie about our collective consciousness that very well may be the next step in our spiritual evolution. 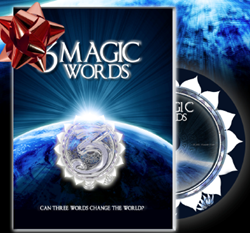 If you have a dream, go for it. Don’t let anybody tell you what you are supposed to be doing with your life. You are the only one who knows that. Listen to your heart and your own intuition; it will never let you down. -Michael Perlin

What if you lost your memory and had to look deep within yourself to find the answer to life's biggest question, "Who am I"? Using science, nature and spirituality, a new film called 3 Magic Words comes up with a response that is having people look at life from an entirely new perspective.

Michael Perlin, the creator and director of the film, has been on a mission for decades to make this film which he believes has the ability to make a positive impact in the lives of men, women and children on every continent. Ironically, it was a fortune cookie he received when he was just 9 years old which read, “One of the great pleasures in life is doing what others say you cannot do” that inspired him to do everything necessary to make this documentary and have it be available to everyone on the planet.

It was 1992 when Perlin was fresh out of college, living in Dallas, Texas and working as a waiter at a major restaurant chain. His great curiosity and interest in all things metaphysical led him to a book that provided many of the answers and wisdom he had been seeking since childhood. One day in the local used bookstore, he came across a golden yellow book with a magical genie lamp on the cover, which he had never seen there before. The book was called “Three Magic Words” by Uell Stanley Andersen (1917- 1986) widely known as U.S. Andersen, which he ended up purchasing for $2.00 and having as his key inspiration for a modern day response to human kind’s biggest questions.

Originally published in 1954 and later renamed to The Key to Power and Personal Peace in 1972, Three Magic Words is not about a religion or a sect or a society. In its entirety, it is a series of essays aimed at revealing human being’s power over all things. Andersen writes that there is only one mover in all creation and that mover is thought.

While reading the book, Perlin discovered many of the answers he was seeking. It was the common theme he had been searching for all along, and it was so simple. He then became focused on moving West, in spite of doubts and concerns by his family and lack of money, to realize his vision of revealing these truths and timeless wisdom in a way that everyman and everywoman could relate to and apply to their lives.

In hindsight, it is a blessing that Perlin did not know just how many obstacles he would encounter to create, direct and complete a film of this scale. He literally survived the elements while homeless in Southern California at several points and experienced many Hollywood doors closing in his face along the way. Quite simply it is and has always been his very pure desire to help other people empower themselves that has gotten the film made and literally available everywhere.

The film had its big Hollywood Premiere at the Harmony Gold Theater and sold out all 400 seats the day before the event. Soon after, the movie was picked up by a major distributor and released in over 100 million homes via various cable and satellite TV services. Today, 3 Magic Words continues to be purchased as a Video on Demand via Amazon.com and is awakening people on every continent. The film is also now available in DVD format throughout North America and soon other countries.