Jack Eadon’s life has always been like a movie—comic, tragic, and full of plot twists. From being a cult rock band member to an author and surviving five brain surgeries, Eadon has had a full technicolor, 3-D life worthy of Hollywood’s attention. 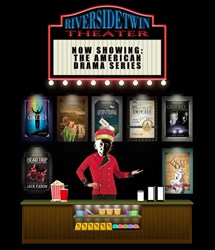 'A Consequence of Greed', think ‘Lost’ and ‘Breaking Bad’ meet ‘The Office,’ with a multicultural, comedic spin!”

Author, cult rock band member, and brain tumor survivor Jack Eadon has always lived a life any actor would envy having for a role. Now, Eadon has plans to take his virtual life story to Hollywood by marketing his magnum opus, his pseudo-autobiographical seven-book American Drama series of novels. Each novel is thematically linked to one of the Seven Deadly Sins, and together, they form a cinematic treasure chest of stories that make up his “virtual life.”

To create interest in a TV/movie deal, Eadon has launched a new series of website pages at http://www.TheAmericanDramaSeries.com. Upon arrival there, the viewer is greeted as if he were entering a movie theatre, prepared to watch a screening of the American Drama Series. A virtual Jack Eadon is even ready to sell theatre-goers popcorn—or film rights. The web pages contain book trailers for each novel, an overarching video for the entire series, and a preview of Eadon’s recently released 3-D animated music video for the Khazad Doom cult rock band’s classic song “Stanley’s Visit to Kerkle-Morff,” which is garnering fans at YouTube and being publicized on the Khazad Doom tribute Facebook page in Italy. Eadon played lead guitar and wrote music for Khazad Doom in the 1970s.

Knowing that Hollywood is always clamoring for unique properties, readers have long told Eadon that his books are screen gems just waiting to be discovered. The novels tell the Cinemascope-size womb-to-tomb saga of Marcus Ramsay, Eadon’s main character and alter ego, as he experiences each of the Seven Deadly Sins. The Seven Deadly Sins, in modern dressing, take Marcus through coming-of-age lessons, corporate intrigue, murder, the supernatural, romance, and family drama—the stuff of which great movies and TV are made. For example, for the second book in the series, “A Consequence of Greed,” Eadon says, “Think ‘Lost’ and ‘Breaking Bad’ meet ‘The Office,’ with a multicultural, comedic spin!” And the fifth book, “The Charm” or “The Choice” would be “a combination of ‘Once Upon a Time,’ ‘Black List,’ and ‘The Mentalist,’ but every episode would be in a different historical era with a different guest star.”

For those interested in pursuing TV or film projects, Eadon presents at the new site a “media kit” that includes:

In his writing and all his life, Eadon has always had a Don Quixote perspective, not wanting to see life as it is but as it could be. Now, putting a film twist on his perspective, Eadon says, “Some people see the world in black and white. That’s certainly fine. But I see the world in technicolor—even 3-D!” In keeping with his Quixotic quest, this spring Eadon will be embarking on a cruise ship speaking tour to promote his newest book “DO LIFE BETTER...Now!” about living more effectively in the present moment.

Interested producers, screenwriters, and others in the media may contact Eadon regarding the film properties for his books by visiting http://www.TheAmericanDramaSeries.com and submitting one of the book project query forms. A forty-eight-hour response is guaranteed by Eadon or his publicist, Robert Smith, of Champion Media Worldwide.