Garmin Forerunner 620 and 220 GPS running watches need to be ordered prior to December 1st if you want to get one for Christmas says Heart Rate Watch Company. The company estimates that later orders may not get filled due to demand. 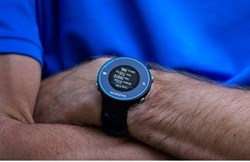 These two GPS watches are the hottest selling Garmin new product releases ever...

Garmin Forerunner 620 and Forerunner 220 are the two hardest to get GPS watches for runners on the planet right now according to the Heart Rate Watch Company.

"These two GPS watches are the hottest selling Garmin new product releases ever and nobody has them in stock to sell straight off the shelf", says Rusty Squire, President of the Heart Rate Watch Company. He adds, "My advice is to order one this next week because if you do not it is very probable you will not receive it until after Christmas in my opinion".

The Garmin 620 shaved a full 40% of the weight off from the preceding 610, added Bluetooth and Wifi, added features like Run oscillation and ground contact time and created a much thinner watch. "Somehow these major changes were not lost on consumers and they have rushed to line up to buy the 620 in droves", says Squire.

"The same is true with the Garmin Forerunner 220 as it shaved about 15% of the weight, added a higher resolution color screen, vibration alerts, Bluetooth data transfer, an internal accelerometer so no foot pod is needed on the treadmill and a while host of other upgrades", says Squire.

"Never within a one generational span of GPS watches have there been so many significant upgrades which more than explains why the product is so popular", says Squire. He adds, "It is worth the wait because everything else is a compromise".

"We are currently fielding about 50 calls per day and that is just on people that ordered in October and November wondering when they are going to receive them", says Squire. He adds, "That is why we are recommending that people get in line now, especially if they want one for Christmas".

"We have shipped out a couple dozen of these watches but the other 90% have had to play the waiting game", says Squire. He adds, "I'm hopeful that Garmin will start getting caught up a bit in late November and early December because December 23rd is the last realistic ship date for Christmas".

"With these new products and high demand delivery is running about 2 months behind the product launch", says Squire. He adds, "Garmin has a lot of hot new products including the Garmin VIRB Elite action cameras and Garmin Edge Touring so there is a lot on the plate".

"At the Heart Rate Watch Company we have been testing heart rate monitors and GPS watches for many years", says Squire. He adds, "Simply call our expert testers at 866-586-7129 to ask questions and we'll do our best to keep you informed on how these products work, function and even what would be best for your needs".

Garmin Forerunner 620 and 220 Have Finally Conquered The Weight, Thickness and Fit Issues For Women