Former Alaska Gov. Sarah Palin will be the featured speaker at Liberty University's final Convocation of the Fall 2013 semester on Wednesday, Dec. 4. 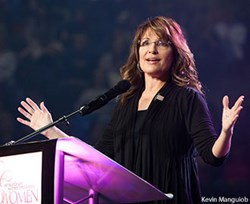 Former Alaska Gov. Sarah Palin will be the featured speaker at Liberty University’s final Convocation of the Fall 2013 semester on Wednesday, Dec. 4.

Palin will be introduced by President Jerry Falwell, Jr., who issued the following statement about her visit:

“While Governor Palin has visited Liberty's campus in the past, she has never appeared at a Liberty event. I am thrilled that Governor Palin and our student body will now have a chance to interact in a Q-and-A format. At Billy Graham's 95th birthday party earlier this month, the governor and I spoke of our mutual anticipation for her upcoming visit.”

Palin is a leading voice for American conservatism. She is the first woman and youngest person to be elected governor of Alaska and was the first female Republican vice presidential candidate in U.S. history. She is an internationally sought after speaker and has been a contributor to Fox News.

Her latest book, “Good Tidings and Great Joy: Protecting the Heart of Christmas,” was recently released by HarperCollins and is currently a New York Times best-seller. Signed copies will be available during Convocation.

“This book is not about isolated trivialities. It's not really about gingerbread cookies, or stockings hung by the chimney with care, or the big fat man with the long white beard. It's not about a holiday at all,” Palin writes. “It's about that little baby wrapped in swaddling clothes, who arrived long before hope and change became political manipulations. It’s about Christ and our ability to worship Him freely. It’s about America, and what liberty truly means in our day-to-day lives.”

Liberty's Convocation is North America’s largest weekly gathering of Christian young people. It is held three times a week from 10-11 a.m. in the Vines Center. Students are able to hear from prominent speakers of national and global significance from every sphere of society.

To request press credentials, please visit http://www.Liberty.edu/pressinfo. Streaming video of the entire Convocation will be available at http://www.LibertyChannel.com, and accommodations can be made, upon request, to provide an “in-house” HD or SD pool feed via satellite and/or the LTN content delivery system.