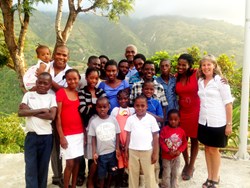 I was extremely humbled to have been chosen as the ambassador and I envision myself as a voice that can raise awareness on behalf of the children, for a better future.

A fundraising cocktail was held at the Art Gallery of Laval's St. Vincent de Paul, which marked the beginning of the annual subscription campaign 2013-2014. Ralph Leroy, who recently visited the children over the summer, will return to Haiti at the beginning of December.

Maison Arc-en-ciel was founded in 1996 by Danielle Reid and her husband Robert Penette in the village of Bouthillier, a suburb of Port -au- Prince. It was later relocated in 2001 near Turin, the house currently hosts fifty vulnerable orphans infected or affected by HIV and AIDS. It offers two distinct services: the internal program, a home for the protection and comfort of a family with children without community resources, and external program, a house nearby that helps mothers and families through various training programs.

Diane Mainville, the foundation's President, thanked Ralph Leroy for his generous involvement. Ms. Mainville cited Antoine de Saint- Exupéry, "You see in life, there is no solutions, there are only forces. We must create and solutions follow. "

With a great pleasure, Ralph Leroy welcomed his new mission with humility, showing a strong bond with the children in previous visits to Haiti. The designer, who affectionately refers to the orphaned children as "his" children, said, "I was extremely humbled to have been chosen as the ambassador and I envision myself as a voice that can raise awareness on behalf of the children, for a better future."

Just in time for the holidays, Ralph Leroy, is set to launch its new online store, which will be accessible on November 29, 2013. The site will feature the label's accessories collections and the new Official Ralph Leroy T-Shirts that benefit the children of the Maison Arc-en-ciel house in Haiti.

Montreal fashion designer Ralph Leroy is paving his own lane in the fashion realm. Known for his daring cuts and audacious tones, he sets his own standards, while maintaining originality and excellence.

Recently being the favorite amongst the press during Shanghai Fashion Week, he pushes the artistic edge with poise and confidence. Ralph is a man of many talents, with much artistry to be unveiled.