Writer, performer, Tyler Reese, is joined by Kimberley Dahme on vocals (best known as the bass player for the rock band BOSTON) for the release of his transcendent, progressive rock single "Simply to Choose" (tylerreesemusic.com). 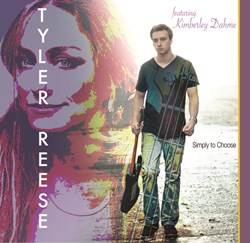 Simply to Choose is an exploration of transcendent, progressive, high energy rock featuring the contemporary, lightning fast, technical chops of Tyler Reese and the powerful and soulful vocals of Kimberley Dahme.

Reese Entertainment and Publishing and REMU Records, in conjunction with Palette Productions Nashville, is excited to announce the latest single from guitarist and songwriter Tyler Reese (tylerreesemusic.com), a progressive rock track entitled “Simply to Choose.” Originally written in 2010 by Reese, it was later rewritten along with Jeff Silverman during 2013 for international release. Reese, who performed all guitars on the track, is an up-and-coming guitar phenom who has racked up performance credits with numerous artists, including Gary Grainger, Martin Sexton, and Kevin Walker, and has opened for a wide variety of acts, most notably Bo Bice, Scotty McCreery, and Ron Holloway. Reese has studied guitar performance at the Berklee College of Music, and has gone through master level instruction, including private, one on one study with virtuoso and international recording artist Pat Metheny.

Performing vocals on the track is Kimberley Dahme (http://www.kimberley.de/), an internationally known singer-songwriter, bassist, and producer, who currently resides in Nashville, TN. Dahme is most recognized for her tenure as the bassist for hit rock band BOSTON, whom she has performed with since 2002, in addition to her work with the band Color Three and her releases as a solo artist. Dahme has three solo albums to her credit, and has also participated in the release of a star studded tribute album, consisting of unreleased tracks by late guitarist Tommy Bolin, which also involved artists Randy Jackson, Derek St. Holmes of Ted Nugent fame, and Jeff Pilson of the 80s metal band Dokken. The new BOSTON CD is set to be released December 3, 2013, with Dahme featured on vocals on several tunes.

Jeff Silverman (palettemusic.net), former session and touring guitarist for Rick Springfield, produced the song, and was co-writer and producer of the CD From The Vault, a collection of previously unreleased and remastered tracks from Springfield. It was re-released 2010 on Frontiers Records. Silverman also recorded and produced at Sound City Studios in Los Angeles, CA, frequented by such artists as Tom Petty, Fleetwood Mac, Foo Fighters, and the aforementioned Springfield.

“Simply to Choose” is a continuation of Reese’s explorations of progressive, hard rock, dating back to 2009 with his time in the Fredericksburg, VA based progressive rock group Risus21. With the churning guitar intermingled with a majestic cello arrangement, soaring vocals, and lean rhythmic backing, “Simply to Choose” evokes simultaneously the rock and roll aesthetic of seventies and eighties hard rock groups and modern heavier styles including alternative metal and mainstream rock. It is a superb release showcasing not only the contemporary, lightning fast, technical chops of Reese, but also the powerful and soulful vocals of Dahme.

Reese is also currently in the process of writing and recording an album with established pop, jazz artist Elisa Dease (Fiorillo), currently with the NPG as the back-up singer for platinum selling recording artist Prince. He is also touring with Nashville based country music artist Adrianna Freeman. Dahme is promoting the release of her Best of… album, and is in the process of producing new music with her band Color Three. In addition to her duties as bassist, she will also be performing lead vocals on some upcoming releases from Boston. A CD release party will be held at Belcourt Taps in Nashville on December 6, 2013 with performances at 6 and 8PM.