There’s Plenty to Be Thankful For, Charlie Brown 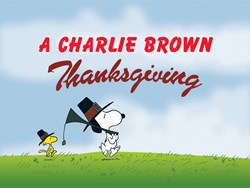 They’re as youthful and vibrant as ever—you’d never guess that this Thanksgiving, the Peanuts gang will celebrate their 40th anniversary as stars of A Charlie Brown Thanksgiving. The classic TV special, which debuted on November 20, 1973 on CBS, gave Thanksgiving dinner a whole new twist: toast, jelly beans, pretzels, popcorn, and sundaes. This year, fans can celebrate the unique Peanuts spirit of Thanksgiving in a variety of ways:

Chat with James Maslow during a Thanksgiving-themed Social Media Party
The star of Nickelodeon’s Big Time Rush and member of the band of the same name will host a social media party on Twitter and Instagram, chatting with fans, sharing favorite Peanuts Thanksgiving memories, and giving away great Peanuts gifts.

Soar with Snoopy During the Macy’s Thanksgiving Day Parade®

On November 28, Snoopy and Woodstock will ride high during the 87th Annual Macy’s Thanksgiving Day Parade® in New York City. This will be Snoopy’s 37th Macy’s parade—in fact, Charles Schulz’s beloved beagle holds the record for the most appearances in the parade, and the most balloon versions (seven).

The new Snoopy and Woodstock balloon being paraded during the Macy’s Thanksgiving Day Parade® is also making its videogame debut in the “Snoopy’s Street Fair” and “Snoopy’s Candy Town” games from Beeline.

Be Inspired, Be Grateful with the Peanuts Be Thankful Book (Running Press Kids)

In this charming little book, appropriate for ages 4 and up, Charlie Brown, Snoopy, Linus, and the whole Peanuts gang demonstrate kindness and appreciation through humor and wisdom. This assortment of inspirational comics and quotes reminds readers of the importance of giving thanks.

Featuring the Peanuts characters as Pilgrims aboard the Mayflower, this cheerful and clever card wishes the recipient “a boatload of fun on Thanksgiving Day!”

On Thanksgiving night, gather friends and family for the 40th Anniversary broadcast of the beloved Peanuts special, A Charlie Brown Thanksgiving, when it airs on ABC at 8:00 p.m. (ET/PT), followed by The Mayflower Voyagers, in which the Peanuts characters re-enact the Pilgrims’ journey and the first Thanksgiving.

Then watch both of these classics all over again—as often as you like—with the 40th Anniversary Deluxe Edition DVD from Warner Home Video, remastered with improved picture and audio. The DVD includes A Charlie Brown Thanksgiving, The Mayflower Voyagers, as well as the featurette Popcorn & Jellybeans: Making a Thanksgiving Classic.

“At Peanuts, we're thankful every day for the extraordinary characters that Charles Schulz created, and who continue to charm and inspire audiences around the world," says Leigh Anne Brodsky, Managing Director, Peanuts Worldwide. "We hope Peanuts fans will enjoy spending their Thanksgiving this year celebrating 'an attitude of gratitude' along with Snoopy, Charlie Brown, Linus, Lucy, and the whole gang.”