The SPIE Women in Optics 2014-2015 18-Month Planner aims to inspire a new generation to pursue careers in STEM — science, technology, engineering, and mathematics — through stories from nearly 30 women working in optics and photonics. The planner is available at no charge from publisher SPIE, the international society for optics and photonics. 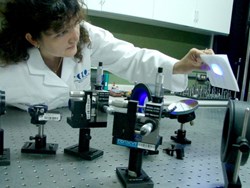 Amalia Martínez-García, a researcher at the Centro de Investigaciones en Óptica and Vice President of the Mexican Academy of Optics, is among those featured in the new SPIE Women in Optics planner.

STEM is the most exciting career path imaginable, because science and engineering are driving the future.

Women in occupations ranging from university professor and laboratory researcher to entrepreneur and CEO share stories of inspiration and discuss the challenges and rewards of careers in fields not often practiced by females, in the annual SPIE Women in Optics 18-Month Planner.

The 2014-2015 planner showcases the work of 28 women making a difference in optics and photonics, and aims to inspire the next generation of girls and young women pursuing careers in science, technology, engineering, and mathematics (STEM) fields.

Produced annually, the planner is available at no charge from SPIE, the international society for optics and photonics.

STEM is, “the most exciting career path imaginable,” says contributor Susan Tousi, vice president of engineering at Illumina, a developer and supplier of tools and integrated systems for large-scale analysis of genetic variation and function.

Because science and engineering are driving the future, Tousi says, the best and brightest minds are needed: “Many of my highest technical contributors have been women. We must make use of this rich talent base to make our dreams of the future a reality.”

Women interviewed in the planner say that inspiration to pursue STEM careers has come from parents, teachers, and other mentors:

As for challenges, “Assume any barrier you face is addressable with training, education, experience, or grit,” advises Amy Eskilson. Her career in the business side of science began almost by accident. After studying radio and television broadcasting, she joined the advertising department of a fledgling photonics company. Now president and CEO of Inrad Optics, Eskilson says she has learned not to let preconceived limitations based on gender get in the way.

University of Central Florida professor Kathleen Richardson urges women in the field to remember to reach out to those coming up in the field. “Consider how you've been influenced by someone who took a moment to share a little something with you and how you have 'paid it forward,’” Richardson said. “Your communication to others, especially those in their early professional stage, can have a lasting impression and impact.”

SPIE Women in Optics promotes personal and professional growth for women through community building, networking opportunities and encouraging young women to choose optics and photonics careers. To receive a copy of the planner, email pascale(at)spie(dot)org.

The 2014-2015 planner is sponsored by Edmund Optics, Inrad Optics, Logical Marketing, and nLIGHT.

SPIE is the international society for optics and photonics, a not-for-profit organization founded in 1955 to advance light-based technologies. The Society serves nearly 235,000 constituents from approximately 155 countries, offering conferences, continuing education, books, journals, and a digital library in support of interdisciplinary information exchange, professional networking, and patent precedent. SPIE provided over $3.2 million in support of education and outreach programs in 2012.