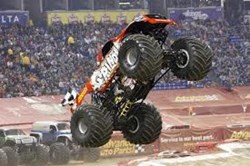 With tires as big as a car, the massive Monster Jam machines just keep on trucking. This year's 266-event season is set to launch again, with stops scheduled in 94 cities across the country.

The season-long competitions culminate with the Monster Jam World Finals in Las Vegas every year, with this season’s finals scheduled at Sam Boyd Stadium March 20 - 22, 2014.

The series is sanctioned under the umbrella of the United States Hot Rod Association (USHRA) and takes place primarily in the United States. Although individual event formats can vary greatly based on the intermission entertainment, the main attraction is always the racing and freestyle competitions by monster trucks.

"Online traffic for Monster Jam tickets has been flying," said Felina Martinez at online ticket marketplace BuyAnySeat.com. "Not only are tickets beginning to sell out for some of the dozens of upcoming shows, the event’s popularity grows each year as new trucks and competitors join the tour.

"Since fans of all ages attend these events, we’re proud to be able to offer them the most comprehensive and continuously refreshed selection of Monster Jam tickets, with a worry-free guarantee to protect their purchase.

"To access the continuously updated selection of Monster Jam tickets we have available, fans can go to BuyAnySeat.com and search for Monster Jam – then select their tickets," said Martinez.

In the donut competition, drivers try to spin their trucks until they get dizzy, the truck can't go any more, or they think they have a good enough score to win.

Side-by-side racing is done in the traditional heads-up tournament format, where the first truck to cross the finish line moves onto the next round until it is eliminated or wins the Championship race.

The Freestyle competition gives drivers 90 seconds, plus a 30 second bonus period, on an open floor to show off their skills as they drive the huge trucks over cars. Drivers perform stunts and tricks that make these massive high-horsepower vehicles appear to dance gracefully across the track.

The Freestyle winner is determined by three judges. Each one gives the driver a rating out of a possible 10 and these numbers are then added up for a total tally.

There are two winners from both events. However, if the same person who won Racing that night also won Freestyle, they then receive the Double Down trophy, named after the Double Down activities in the Las Vegas Monster Jam World Finals. (Source: Wikipedia.com)

An online ticket marketplace, BuyAnySeat.com connects sports, theater and other live entertainment fans to an extensive worldwide network of ticket sellers. The site’s simplified listings and navigational tools enable fans to easily locate, compare and purchase inexpensive, discounted or lower-priced tickets to virtually all advertised sports and entertainment events around the globe.

The marketplace, which is PCI-compliant and Norton Secured, also provides customers with a complete Worry-Free Guarantee on all ticket purchases. Based in Denver, Colorado, BuyAnySeat.com is a subsidiary of Denver Media Holdings. For more information, please visit http://buyanyseat.com.