For Third Time in History, Woman to Appear in Televised World Series of Bowling

Clara Guerrero will compete in the PBA Cheetah Championship on ESPN, Dec. 1 at 1 p.m. ET. 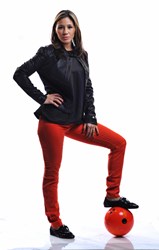 Clara’s appearance in the World Series of Bowling is a great and historic moment in the history of the PBA.

The Professional Bowlers Association (PBA) announced that professional bowler Clara Guerrero will become the third woman in PBA history to qualify for a PBA tour telecast. Guerrero’s historic appearance at the World Series of Bowling will air on Sunday, December 1 at 1 p.m. ET on ESPN.

Guerrero joins an elite list of female athletes to reach this premier level of bowling recognition. Kelly Kulick and Liz Johnson are the only two women in history to compete in a televised PBA Tour Final. Kulick went on to win the 2010 PBA Tournament of Champions – the only woman to capture a PBA Tour Title to date.

A native of Colombia, Clara graduated from Wichita State University in 2006, where she was a bowling all-star and a member of the National Championship winning team. Guerrero now resides in Austin, TX and travels the world competing in bowling tournaments.

“Clara’s appearance in the World Series of Bowling is a great and historic moment in the history of the PBA,” said PBA Commissioner, Tom Clark. “She is an outstanding competitor and we are excited to see her compete on the PBA’s return to ESPN.”

Guerrero is a fourth seed in the PBA Cheetah Championship and will compete against seven-time Tour champion, Wes Malott. Her appearance on ESPN will kick off the PBA’s return to ESPN, with consecutive coverage of bowling every Sunday from December 1 through April 13.

About the PBA
The Professional Bowlers Association (PBA) is an organization of more than 3,200 of the best bowlers from 17 countries who compete in PBA Tour, PBA International Tour, PBA Regional and PBA50 Tour events. Nearly one million ESPN viewers watch PBA Tour on Sundays during the tour season and thousands around the world watch PBA activities on Xtra Frame, the PBA’s exclusive video streaming service. PBA sponsors include Brunswick, Ebonite International, GEICO, Jack Link’s, MOTIV, Storm Products and the United States Bowling Congress, among others. For more information, visit http://www.pba.com.