Playing music on any instrument can lead to physical stress, Tendonitis, CTS and a myriad of ailments plague many of the most accomplished players. Joe Palese's "Yoga For Guitarists" developed out of years of success with teaching musicians the poses and stretches that address these problems. 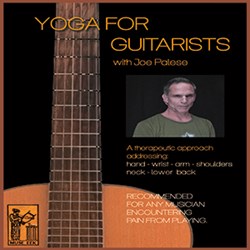 Joe is a very down to earth guy, and he really knows what he is doing... Everything is clear, each pose is thoroughly explained, right down to cautionary information.

Yoga instructor Joe Palese is also a guitarist, and in his many years of gigging, what with hauling equipment, the stresses of road work, and the strain of holding a heavy guitar for hours, or standing in one position for too long, he was finding himself with all kinds of debilitating aches and pains at the end of the day. But by utilizing Yoga's ancient poses and stretches, he was able to relieve these issues. And as he continued with his playing, he found more and more musicians asking him to help them, each with their specific problems. Over the years, he found that he was helping, and in some cases even curing, stress-related injuries. Now, with a record of these successes behind him, Palese and Muse-Eek Publishing Company present "Yoga for Guitarists."

The DVD is marketed through Muse-Eek publishing for two reasons. Firstly, because guitarist/president of Muse-Eek Publishing, Bruce Arnold, had taken yoga lessons with Joe for exactly the reasons stated above. Conversely, Joe was one of Bruce's students for a number of years. As a result, Mr. Arnold knew that the product would a boon to suffering musicians, and be an important addition to the Muse-Eek catalogue. Secondly, this product focuses on musicians, and does not target the general public, which may seek yoga purely in terms of fitness or spiritual practice. (Although it is possible to become more interested in both of these aspects of Yoga through "Yoga for Guitarists" and this is discussed within the various lessons.) Since Muse-Eek is dedicated to music education, the right audience will visit the site. "Muse-Eek likes to present the full picture of learning music, with books and DVDs books covering the whole gamut of creating and playing music," says Arnold, "and a crucial part of that is the purely physical aspect. Playing for hours on end can take a mighty toll on the body, and this course shows you what you can do about it. It's very proactive.

Joe Palese is an E-RYT 200 YOGA ALLIANCE Certified Teacher and has been teaching yoga professionally for 16 years. Joe completed his first Teacher Training at NYC's World Yoga Center in 1997 and met and studied with John Friend beginning in the Spring of 1998. Since then, Joe has studied with Tias Little, Erich Schiffman, Judith Lasater, and Amy Ippolliti. Teaching national and international retreats and workshops, Joe recently presented at the Southeast Yoga Conference in Atlanta, GA, and led his 4th 200-hour Teacher Training in November, 2012. As a professional musician and composer, Joe blends his experiences in playing music and using yoga disciplines to create a sound approach to any practice.

"Joe is a very down to earth guy, and he really knows what he is doing. This comes across in the videos. Everything is clear, each pose is thoroughly explained, right down to cautionary information," says Arnold. "That's important, because you don't want to do anything incorrectly, or overdo it."