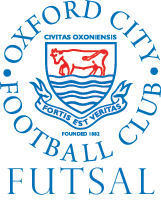 “We are committed on every level to make Oxford City Futsal the top team in England, building off of our championship tradition"

CEO & President of Oxford City Football Club, Thomas Anthony Guerriero commented, “We are very proud of our one of our tremendous futsal player’s Alfee Robbins, in being selected to the English National Team for Futsal. We are committed on every level to make Oxford City Futsal the top team in England, building off of our championship tradition.”

About Oxford City FC
Oxford City Football Club (http://www.oxfordcityfc.com) is a publicly traded company with short term plans to go to the NYSE, which is an owner of two professional football clubs, a professional futsal team, and a professional basketball team. Oxford City has one football club, which plays in the Conference North Division and another football team, which plays in the Hellenic League Premier Division of the English Football Association. Their futsal team is competes at the highest level in the England and was the 2012 Champions.

The company is strategically positioned to implement their vertical integration model incorporating all their divisions towards future growth. The company also owns Oxford City University (http://www.oxfordcityuniversity.org) in the United States, which expects to have its first brick and mortar campus offering their comprehensive professional degree programs in South Florida in the near future. OXFC expects the strong ties in Oxford where they own Oxford City Sports College, to strategically put the University in a tremendous position for the future. The company also owns a Registered Investment Advisory & Real Estate Firm based in South Florida. This diversified portfolio of companies has established a solid core foundation, which we hope will allow the company to have a multitude of revenue streams in the future.

ABOUT THOMAS ANTHONY GUERRIERO, CEO
Thomas Anthony Guerriero is world renowned for being one of the most powerful and influential CEO’s in the history of Wall Street. His financial advisor-training program is legendary for creating some of the top producing financial professionals in the world. Mr. Thomas Anthony Guerriero is currently the President and Chief Executive Officer (CEO) of Oxford City Football, Inc. (Stock Symbol: OXFC). Thomas Guerriero has over fifteen years of extensive upper executive experience. Mr. Guerriero began his career in the financial markets in 1998, and soon thereafter earned the position of Senior Vice President of the securities division of First Union (NYSE:FTU), one of the largest institutions in the world with over $400 billion in client assets. After First Union was acquired by Wachovia, (NYSE:WB) Mr. Guerriero continued to build his client base and team through several institutions and think tanks, eventually etching his name in stone industry wide, by becoming the CEO of a Member Firm, TAA. There he gained the prestigious recognition of being one of the youngest individuals to ever head a member firm.

His success at TAA led him towards the second acquisition in his career, this time by High Point Capital. Thomas Guerriero’s unique ability to create unique systems both technical and fundamentally, recruit, train, mentor, and inspire individuals through his creative methodologies has led him to be recognized as a global force to be reckoned with. His most recent acquisition was at the helm of Global Wealth as CEO. He was able to maximize profitability and surpass all expectations in the face of the toughest economic climate of our generation, leading towards the third acquisition of his career of Global Wealth and its Institute of Finance.

As one of the most talented minds and influential people in the world today Thomas Anthony Guerriero shows no signs in letting up. In 2011, he was nominated, accepted, and confirmed as one of the youngest inductions ever into Marquis’s Who’s Who in America. Also in 2011 Thomas Guerriero became one of the youngest owners of a professional sports team. He became an owner of a professional basketball team, the Springfield Armor in the NBA D league (The Brooklyn Nets Affiliate). Mr. Guerriero graduated Graduate School at Harvard University where he studied International Relations, holds two Graduate Certificates from Boston University & University of Notre Dame, and has two BA degrees from Fairleigh Dickinson University & Thomas Edison State. He has held several professional licenses over the course of his career Series 7, Series 63, Series 66, Series 24 licenses. Always looking for a challenge Mr. Guerriero is a former professional soccer player, holds several world records, climbed two of the seven summits, been featured in a major motion picture with Oliver Stone, been featured on television around the world, and is a published author with “How To Understand & Master The Stock Market”, “Understanding & Master Securities Laws And Regulations” and “Plan For Crisis”.

This press release contains forward-looking statements within the meaning of Section 27A of the Securities Act of 1933, as amended, and section 21B of the Securities and Exchange Act of 1934, as amended. Readers are cautioned not place undue reliance on these forward-looking statements, which are only predictions and only speak as of the date hereof. Forward-looking statements usually contain the words "estimate," "anticipate," "believe," "plan," "expect," or similar expressions and are subject to numerous known and unknown risks and uncertainties. These risks and uncertainties could cause the Company's actual results to differ materially those indicated in the forward-looking statements. Investors are encouraged to carefully review regulatory filings prior to investment consideration. Past performance is no guarantee of future success or that there cannot be losses or business interruption. The Company is in a rapid growth sector that may or may not continue to grow in the future and therefore poses risks that may be different than other investments. Management regularly provides news and additional information believed to be true and accurate at the time of dissemination but has no requirement to modify, comment or change in the future should circumstance change or information prove to be inaccurate for any reason. Additionally, the Company makes every effort to comply with all applicable laws.