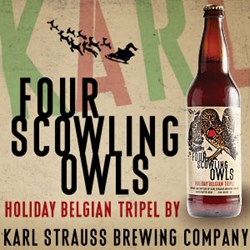 We intentionally brew beers that get better with age with the hope that people will enjoy a bottle now and let another age until the end of the 12 years.

Karl Strauss Brewing Company is celebrating another record-breaking sales year with the limited release of Four Scowling Owls Holiday Tripel. Four Scowling Owls is the fourth installment of the company’s nontraditional “12 Days of Christmas” holiday series. The collection is built around higher alcohol beers that are meant to be laid down and enjoyed in a vertical tasting at the end of the series. “We intentionally brew beers that get better with age with the hope that people will enjoy a bottle now and let another age until the end of the 12 years,” says Paul Segura, Brewmaster, Karl Strauss Brewing Company.

Four Scowling Owls is a 9% ABV robust Belgian-style Tripel with a citrus zest character and peppery, dry finish. The deep golden beer is brewed with a blend of pale and Vienna malts for a slightly bready base, while Mt. Rainier hops create a mild floral bitterness. The brewers add Belgian candy sugar to the kettle to increase the gravity of the beer while maintaining a lighter body and refreshing mouthfeel. The Tripel is then warm fermented with traditional Westmalle yeast, creating complex layers of citrus, bubble gum, and spice. This beer is spritzy, dry and pairs well with rich and hearty holiday fare. “2013 has been an incredible year—from opening our new tasting room to expanding our beer into the Inland Empire—we are stoked to end on a high note with this delicious holiday Tripel,” says Segura.

Previous beers in the holiday series include Parrot in a Palm Tree Baltic Porter, the Great American Beer Festival award-winning Two Tortugas Belgian Quad, and Mouette a Trois Holiday Fruitcake Ale. “We sell out of our holiday beer each year, but if you’re lucky enough to find bottles from year’s past, I’d suggest laying them down and seeing how they evolve over time,” says Segura. Fans can pick up a limited-release bottle of Four Scowling Owls at Karl Strauss’ recently opened tasting room at the main brewery in Pacific Beach, or in 22oz bottles and on draft throughout California. For more information on Karl Strauss’ 12 Days of Christmas series, visit http://www.karlstrauss.com. Share it. Cheers.

Label Copy:
Don’t upset these angry birds: share a bottle of this year’s Holiday Tripel. Four Scowling Owls – the next release from our “Twelve Days” holiday series – is a robust Belgian style strong Ale with orange citrus flavors and a spicy aroma. Amarillo and Mount Rainier hops balance out the Vienna malt character. The finish is dry and warm, perfect for those “chilly” San Diego winters. Birds of a feather drink together.

About Karl Strauss Brewing Company
Karl Strauss Brewing Company has pioneered the San Diego beer scene since 1989 with innovative beer releases like Big Barrel IIPA and Wreck Alley Imperial Stout. The brewery has won 54 medals over the past three years and its Red Trolley Ale is one of the most award winning beers in the world. The company is currently ranked #39 on the list of the country’s top craft breweries with sole distribution in California. 2013 is on pace to be another exciting year of double-digit sales growth, with the main brewery tasting room and new brewery restaurant in Temecula now open. For more information visit http://www.karlstrauss.com or call the brewery at (858) 273-2739. Share it. Cheers.