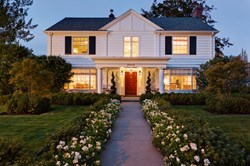 “We’ve had the privilege of collaborating with top NW architects over the past 20 years on a wide range of architectural styles,” said Operations Director Aaron Stevens. “These seven are among the most popular.”

Hammer & Hand, a general contractor specializing in high performance home building in Portland, OR and Seattle, WA, illustrated seven of the most popular home styles in the Pacific Northwest today in an announcement including a sampling of built projects.

“We’ve had the privilege of collaborating with top NW architects over the past 20 years on a wide range of architectural styles,” said Operations Director Aaron Stevens. “These seven are among the most popular.”

2. Craftsman
This Portland Craftsman home remodel designed by Emerick Architects was once a little bungalow, but a remodel transformed it into a larger Craftsman Style home. Craftsman homes like this one often feature gable roofs, decorative brackets under eaves, natural materials and finishes, and handcrafted workmanship.

3. Tudor Revival
Though this style originated in England, many homes in the Pacific Northwest, including this Portland home remodel by Kevin Fischer of Alice Designs and Charlotte Cooney of Domestic Arts, feature Tudor Revival style architecture. Tudor Style homes have steep-pitched roofs, arched entryways, and narrow windows grouped together. While this home is a great example of Tudor Revival design, it is missing the half-timbers often seen set into the stucco facade of Tudor Revival homes.

4. Rustic Cabin/Pacific Lodge
This rustic cabin, designed by Giulietti/Schouten Architects, located near Rhododendron, Oregon is an updated example of classic Pacific Northwest rustic style. With miles of beautiful forest and a myriad of outdoor activities to choose from, the Pacific Northwest is an optimal place for rustic cabin retreats. Built primarily of reclaimed and salvaged wood, this cabin has large common rooms and a stone fireplace common to traditional lodge design.

5. Houseboat/Floating Home
Ever since "Sleepless in Seattle" houseboats have been synonymous with the city of Seattle and the Pacific Northwest in general. In fact, this houseboat, remodeled by Kevin Fischer of Alice Designs and Charlotte Cooney of Domestic Arts, floats in Portland, not Seattle. Houseboats, or "floating homes," are a lot more house than they are boat. While these alternative forms of housing may seem small, they often hold compelling interior design and architecture that makes the most of the small space.

7. Northwest Modern
During the modernist movement a regionally-specific style referred to as "NW Modern" began to gain popularity in the Pacific Northwest. This style uses similar lines and designs of modern style but with a few Pacific Northwest twists. This NW Modern style home designed by Scott | Edwards Architecture proudly features one of these twists: a roof with an extended overhang to create a protected outdoor space year-round, a must in an area known for rain. Many NW Modern homes also feature Japanese design aesthetics and an incorporation of the natural NW landscape.

For more on Pacific Northwest architecture and building, visit the Hammer & Hand website.

About Hammer & Hand
Hammer & Hand is dedicated to inciting evolution in building through service, science and craft. The firm collaborates with clients and architects to build the best of Portland and Seattle, from new homes, to classic remodels, to high performance new construction.