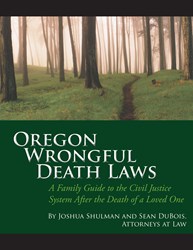 A lawsuit filed in June 2013 has settled for $750,000 after months of negotiations by wrongful death attorney Sean DuBois of Portland firm Shulman DuBois LLC (Lane County Circuit Court, case no. 5013-06324). The lawsuit was filed after David Thom, a Lane County resident, died as the result of a traffic collision. The settlement was approved by Judge Lauren S. Holland on November 8th, 2013 ("Settlement Ends Suit Over Fatal Crash," The Register-Guard, Nov. 26, 2013).

According to police records and investigation, Gregory Garn failed to obey a stop sign at the intersection of Hwy 99 and Awbrey Lane. The heavy Chevy Silverado Crew Cab he was operating moved into the path of a Toyota pickup driven by Patrick McGuirk. The crash resulted in a major collision and the death of McGuirck’s passenger, David Thom (“Fatal Traffic Crash - Highway 99 near Junction City,” Oregon State Police News Releases, Oct. 20, 2012).

Thom was only 45 years old at the time of his death, according to the filed lawsuit (Multnomah County Circuit Court, case no. 1306-08785). He is survived by his mother, Carolyn Thom, his daughter, Chyna Thom, and his two brothers. As a crucial member of his family’s business, Lakeview Stables, and a family man, he will be sorely missed.

A wrongful death is when a negligent, reckless, or intentional act by a person or company causes the death of another. Murder would certainly qualify, but so does a car crash, even if the driver who caused the death did not mean to hurt anyone, but was merely careless.

Wrongful Death claims can be the result of:

After a death, the family members who have been left behind have also been injured – emotionally, psychologically, and sometimes financially. The Oregon law that allows family members to make a wrongful death claim against the negligent people or companies that caused the death is Oregon Revised Statutes (abbreviated “ORS”) 30.010-30.100

The person who brings the wrongful death suit to court for the deceased is called the Personal Representative (PR). The PR is responsible for meeting with the attorney, filing the claim, and making decisions regarding the settlement that will be in the best interests of all the beneficiaries.

In a wrongful death case, damages are available only pursuant to ORS 30.020, so the damages are specified precisely in the statute.

Families can receive compensation for:

To learn more about Oregon wrongful death statutes, damages, and the role of the personal representative, visit http://portlandwrongfuldeath.com/ for a free copy of Oregon Wrongful Death Laws: A Family Guide to the Civil Justice System After the Death of a Loved One. Oregon wrongful death attorney Sean DuBois wrote this guide with his partner Joshua Shulman to educate Oregonians about their rights. The two lawyers are partners at Shulman DuBois LLC, a personal injury firm located in Portland, Oregon.